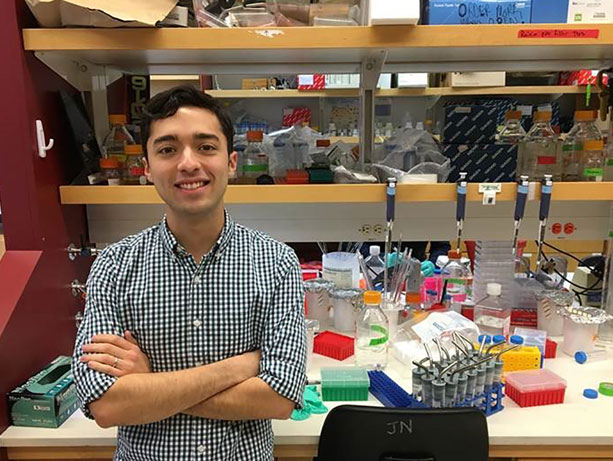 It might have been Alec Gibson’s gentle drawl that did it. He and his patient, another transplanted Southerner, started chatting. They developed rapport.

While this may sound like a standard doctor-patient interaction, it isn’t. Gibson is an M.D.-Ph.D. student who volunteers at the Aloha Inn, a transitional housing for adults in need of a place to live in Seattle. The patient was known to be reticent. But after getting to know Gibson, the patient, who identified with LGBTQ (lesbian, gay, bisexual, transgender, or queer/questioning), opened up in giving a medical history.

“The patient revealed things about their health care that they never revealed before,” said Gibson. It was an interaction that reinforced Gibson’s feeling about the UW School of Medicine was the right place for him to be.

“The program is one of the best in the country,” Gibson said.

Gibson is a student in the Medical Scientist Training Program. At the end of eight years, MSTP participants have earned both an M.D. and a Ph.D., They’re prepared to ask, and answer, some of the most challenging questions in medicine.

Today, Gibson is in the second year of his Ph.D. program. In the lab of Dr. John Nuemaier, professor of psychiatry and behavioral scieences,  he’s researching the role of serotonin in addiction and stress.

“I like the idea of using my medical knowledge to drive research,” said Gibson. “I like that dynamic of growth and exploration.”

If Gibson is committed to his education, he’s also committed to working with underserved populations. It’s a trait that he shares with other UW School of Medicine students, who run manyvolunteer programs in the five-state region of Washington, Wyoming, Alaska, Montana and Idaho. These service learning programs allow students to provide basic medical care while physicians and other personnel stand by to supervise and make referrals for more in-depth care.

Gibson and his fiancé, Ted Gobillot, manage the clinic at the Aloha Inn. They and a third student have accomplished even more: the creation of the LGBTQ Pathway at the UW School of Medicine. Pathways allow students to explore specialized branches of medicine.  This new pathway will join existing ones in in Hispanic and Indian health, care for the underserved, and global health.

This effort was inspired, in part, by Gibson’s childhood.

“Growing up gay in South Carolina was very difficult,” he recalled. Like his patient at the Aloha, Gibson found it hard to let down his guard. “I didn’t feel comfortable disclosing to my health care providers,” says Gibson.

With the new pathway, Gibson and his colleagues hope to make doctors comfortable in treating patients who are

lesbian, gay, bisexual, transgender,or queer, as well as those exploring their sexuality or gender.

This training could lead to a lasting  change that will affect the well-being of people throughout the region.

Students like Gibson — smart, compassionate, driven — are the future of medical care and research in our communities. UW Medicine and the University of Washington are committed to helping them reach their potential, and part of that commitment is financial: working with donors to provide scholarship and fellowship packages that support a superb education.

Gibson, for instance, received a Turner Society Endowed Fellowship during M.D. training. He’s now benefiting from an ARCS (Achievement Rewards for College Scientists) Fellowship. These funds help relieve the burden imposed by the everyday costs of living and concerns about post-graduate debt.

“With this support, I’m less worried about money and finances,” said Gibson. “I can focus more on research, volunteering and education.”

Though school is only likely to become busier as time goes on, Gibson plans to continue volunteering. He’s learning from it: organizational skills, hands-on medical practice and, maybe most important, how to be a good listener and to be present with every one of his patients.

"I’m learning the medicine,” he said, “and how to be a better human being.”