Dr. Ann Collier, UW professor of medicine, has been there from the beginning
Bobbi Nodell
11/24/2015 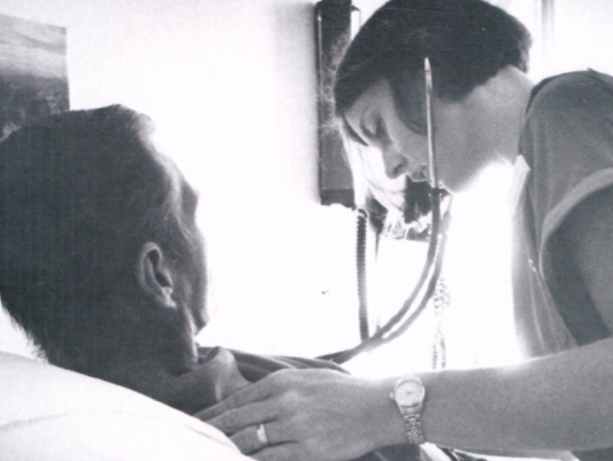 When the AIDS epidemic took the world by storm, Harborview Medical Center was among the first hospitals to open a specialty clinic for HIV/AIDS patients.

“When other institutions weren’t willing to care for these patients, Harborview really stepped up to the challenge to follow their mission to work with disenfranchised populations,” said Ann Collier, UW professor of medicine and director of the UW AIDS Clinical Trials Unit.

Collier was an infectious disease fellow at UW in 1982 when she started seeing patients at Harborview with persistent lymph node swelling.

At the same time, her colleague Joan Kreiss, a UW infectious disease researcher working in Kenya, was on the frontline of the AIDS crisis. Both young doctors knew this disease was unlike anything they had seen before.

People needed a lot of care, especially palliative, social work, psychology and more.  AIDS at the time carried a death sentence for most. Fear spread fast and stigmatized minorities bore the brunt of the disease. In response, healthcare leaders at UW, such as King Holmes, then chief of the Department of Medicine at Harborview, and hospital administrators responded to Collier and Kreiss’ call for help and opened an HIV/AIDS clinic at Harborview.

As the number of patients skyrocketed, the clinic moved to a bigger space on Broadway and Madison and was renamed the Madison Clinic. Collier was the director of the clinic from 1985-1990. Today, the Madison Clinic is on the west clinic wing of Harborview and is run by Robert Harrington, UW professor of medicine, Division of Allergy and Infectious Diseases.

At the height of the AIDS epidemic in the early 1990s, the Madison Clinic was seeing around 800 patients a year, most of whom were expected to die within a year. Clinic staff became very good at supportive care and worked through the stigma.  In 1997, the mortality rate among people with HIV dropped with the widespread use of combination antiretroviral therapy.

However, now that people with HIV are able to lead longer, healthier lives, the number of HIV/AIDS patients seen at the Madison Clinic has continued to climb every year since then – roughly 2,700 in 2014. Today, about 7,400 people in King County are living with HIV/AIDS.

Sara Pascoe, the first nurse practioner at the clinic, remembers having take a patient into a bathroom to examine a groin rash, because all the rooms were full. She said the head of neurology, who happened to witness this, told her anytime she needed a room, she could get one from the neurology clinic.

“This was how it was. Everyone pitched in to help us,” she said.

Pascoe said she was moved by the compassion and dedication of the AIDS clinic providers.

“I saw what were some of the most difficult but most humane deaths I have ever experienced,” she said. She said one patient was deaf and as his disease progressed, he became blind. She said his wish was to die at home. Pascoe said his support system worked on his house to finish it so he could go home.

“The patient had a goodbye party in his house surrounded by family and friends. I said goodbye through a friend who signed my words as the blind patient kept his hands lightly touching the signers so he would understand.”

Pascoe said she carried her pager 24/7 so patients could call her if they needed to go to the emergency room and then she could talk with the Emergency Department staff to smooth the way because HIV care was so specialized and unfamiliar.

Collier said her experience with patients drove her to focus most of her career on clinical research on HIV/AIDS, hoping she could work herself out of a job.

But today, the clinic is bigger than ever. It is run with a mix of roughly 50 full-time positions and additional part-time staff.  The clinic staff includes primary-care physicians, specialty-care physicians (oncologists, dermatologists, neurologists and psychiatrists), nurses, nutritionists, health educators, social workers, pharmacists, financial advocates and others. The clinic has also established satellite clinics in Bremerton, Everett, Federal Way and Olympia. A fifth satellite clinic, the MAX Clinic, formed through a partnership with Seattle-King County Public Health Department, provides care to those most difficult to reach patients who suffer with substance abuse and mental health problems.

Thirty years later, Collier said she is “incredibly grateful” that there is enough research support and patient involvement to develop effective treatments.  But, she noted, there is still not universal access to treatment and the rate of new cases of HIV in King County has remained stubbornly consistent at about 250-300 a year for the past two decades.

“I never expected to be working on the disease this long,” she said.

An open house celebration of the 30th Anniversary of Madison Clinic, in conjunction with the 29th Anniversary of HMC’s UW AIDS Clinical Trials Unit, is planned from 4-6 p.m. Thursday, Dec. 3, in the Madison Clinic lobby to commemorate clinic staff, volunteers and patients. The lobby is on second floor west clinic wing of Harborview Medical Center in Seattle.