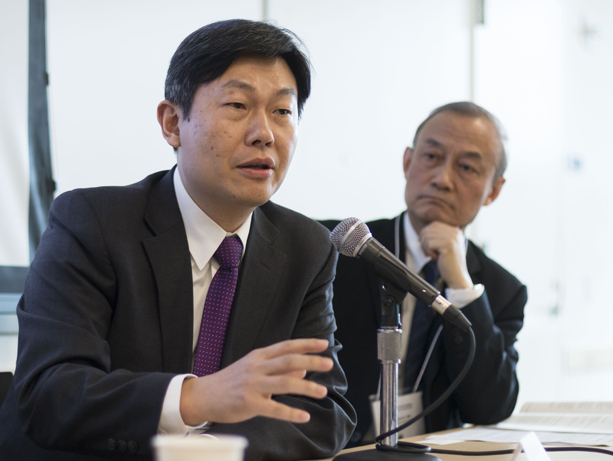 China’s role in global health is expanding rapidly and perhaps at a tipping point. Its next steps were the focus of a landmark symposium hosted this month by the University of Washington.

Since the 1960s, the nation has dispatched medical teams to help with global health crises. Recently it sent medical aid to West Africa during the Ebola crisis. Yet its support had been limited to people, buildings, drugs and equipment, and its influence on global health has not matched that of other major nations.

“SARS was a wakeup call for China,” Lincoln Chen said at the event. He is president of the China Medical Board, an independent American foundation dedicated to advancing health in China and neighboring Asian countries by building university capacity for health policy sciences, health professional education, and global health.

Severe acute respiratory syndrome (SARS), a viral respiratory illness, was first identified in China in 2003 and quickly spread throughout the world. China contained SARS in a matter of months through a mass mobilization of resources, but the outbreak exposed vulnerabilities of a globalized world.

“No single country or institute will be to able tackle these challenges unless we come together with deep understanding of the situation and strategies to move forward,” said Linqi Zhang, professor and director of the Comprehensive AIDS Research Center at Tsinghua University.

The symposium drew leaders and faculty from five Chinese universities as well as global health stakeholders from the UW and Seattle. It was intended to help define direction for academic global health in China. The nation wants to help improve global health equity, but its universities’ capacity “is not strong enough,” said Peiyu Wang, associate dean of Peking University’s School of Public Health.

Chinese universities have lagged other nations in establishing global-health institutes; many are still working to expand relevant degree offerings.

Event participants discussed collaborations with institutions from high- and low-income countries.  Faculty from Chinese universities spoke passionately about wanting more of the nation's students to have the chance to work in other countries to improve their knowledge and skills.

“There are six million students coming out of Chinese universities each year. Compared to U.S. students, who tend to go abroad to low- and middle-income countries, Chinese students tend to go to the U.S. for their study abroad,” Chen said. (At the UW, more than 3,800 Chinese students are currently pursuing undergraduate and graduate degrees.)

Partnership was a theme throughout the event. Steve Gloyd, associate chair for curriculum and education for the UW Department of Global Health, and Guy Palmer, senior director for global health at Washington State University, offered advice on how to partner effectively with low- and middle-income countries.

Use the partner organization’s goals as a starting point, Gloyd suggested, and participate in social events and accept invitations to people’s homes. Build trust by moving toward jointly managed projects.

Palmer emphasized that partnerships are often inherently unequal, and this can skew priorities. Nevertheless, the relationships are rich sources of innovation, he said.

UW’s Department of Global Health partners with Central South University, Fudan University, Peking University and Sun Yat-sen University – other schools whose leaders attended the event. Over the past three years, the UW department has hosted Chinese faculty members and Ph.D. and M.P.H. candidates. The visitors have attended classes and met with UW peers to learn about approaches to global health.

Peking University hopes to work more closely with the UW and the China Medical Board, Peiyu Wang said.

“The symposium provided a good chance for communications among the colleagues and universities of U.S. and China,” he said. “It will greatly improve the understanding and capacity of leading universities in China on global health.”

The symposium was sponsored by the UW Global Innovation Fund.