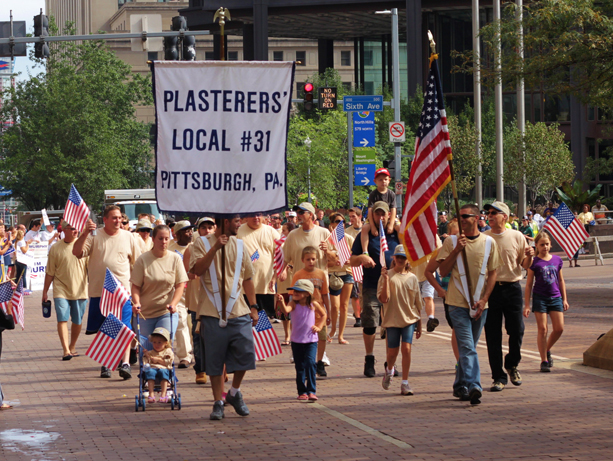 Labor unions, whose numbers are at historic lows in the United States, help to build a culture of health in the workplace and beyond, according to a report from the University of Washington School of Public Health.

Labor unions not only advocate for healthy and safe work environments, but they also improve the lives and promote the health of workers, their families, the community and public health, researchers found after analyzing the contract-protected benefits and working conditions of union members from employers across the Pacific Northwest.

The American Journal of Public Health published the report in June.

“Our health is shaped by our environment and many of our waking hours are spent at work,” said lead researcher Jenn Hagedorn, a clinical instructor of health services. “We can’t ‘leave work at work’ because employment effects every part of our lives—our socioeconomic status, the neighborhood we can afford to live in, the amount of time we spend with family, the hazards we are exposed to, and the level of autonomy we feel over our lives.”

“For generations, labor unions have been protecting the health of working people,” said Amy Hagopian, a UW associate professor of global health and study co-author. “Unions are obvious partners for public-health professionals."

In partnership with Puget Sound Sage, a community nonprofit that advocates for fair pay and safe, affordable housing, the researchers reviewed 16 union contracts across six unions. The resulting report suggested that labor unions can be allies in promoting public health and public-health practitioners can serve as strategic partners to help organize the advocacy work of unions.

Union membership in the United States in 2014 was at a 99-year low. The continued decline of union membership has fed historic inequality and left workers vulnerable to health and safety risks, according to the study.

“The decline of unions is a threat to public health,” said Michael Wright, the director of Health, Safety and Environment for the United Steel, Paper and Forestry, Rubber, Manufacturing, Energy, Allied Industrial and Service Workers International Union. Wright wrote an editorial for AJPH in response to Hagedorn’s research.

“In 1953, 35.7 percent of private sector workers belonged to unions. By 2015, that number was 6.7 percent,” the editorial said. Even with the public sector, overall union membership was at 11.3 percent, the editorial noted. “If inequality is a threat to public health, the decline of American unions is as well.”

In addition to economic volatility, experts believe the way people work is changing. The workplace of the future will be more mobile and flexible than before, and more people will work for themselves.

“The gig economy is a fissured workplace,” said Noah Seixas, a UW professor of environmental and occupational health sciences. “It completely shifts responsibility for economic gains, health, benefits and safety conditions from one corporate entity to another.”

The most prominent example of the gig economy, Uber, the ride-hailing service that allows people to request drivers with a smartphone app and pay by the ride, has been the focus of a nationwide conversation recently. Labor activists and others worry that an apps-powered economy makes it easier for companies to avoid paying minimum wages and benefits, according to a Seattle Times article.

“As the workplace changes, the way we protect our workers and the way we address health and safety conditions will need to adapt,” Seixas said.