Lab pursues clues to HIV, flu in the moment of infection

Lab pursues clues to HIV, flu in the moment of infection 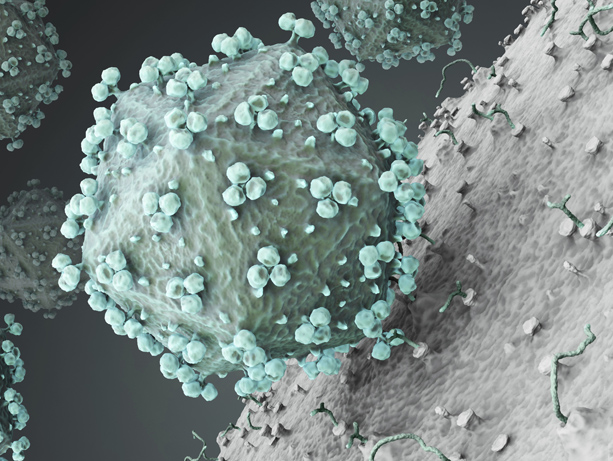 In a basement lab deep within the Magnuson Health Sciences Building, a group of scientists works to decode the mysteries of two deadly viruses: influenza and HIV.

Led by Kelly Lee, assistant professor of medicinal chemistry in the School of Pharmacy, they examine the viral fusion proteins found on the outside of “enveloped viruses” – viruses with membranes.

Kelly Lee is an assistant professor of medicinal chemistry in the School of Pharmacy.
picture of Kelly Lee

These proteins activate the fusion of disease-causing pathogens and host cells.  During fusion, enveloped viruses merge their membranes with those of host cells to penetrate, and infect, the cell.

“We know how the proteins look before they carry out their function,” Lee said, “but we need to understand the structural changes that occur during fusion.”

By doing so, the lab hopes to develop more effective vaccines that will work with the body’s immune system to recognize and neutralize the harmful viruses.

Lee came to UW in 2009 from a postdoctoral position at the Scripps Institute in San Diego. His initial target was the influenza virus; Lee aimed to investigate fusion by using a technique similar to a CT scan to capture 3-D “snapshots” of the virus fusing with a membrane.

Fast-forward to 2015. A five-year grant from the National Institutes of Health supports the lab’s research. Grad student Natalie Garcia is using mass spectrometry instruments to study virus proteins in detail during the fusion reaction. Structure published her paper on the power of examining proteins in motion, as they change their structure to achieve fusion.

“It’s a good way to observe the protein in its most authentic state,” she said. “By understanding the process proteins must undergo to carry out fusion, we hope to aid in the design of therapeutics that inhibit infection.”

Lee’s lab has targeted the elusive HIV virus, whose envelope fusion protein (“Env”) is covered with glycans (carbohydrate or sugar molecules), making it unstable and challenging to characterize. Using an approach similar to Garcia’s, lab alumnus Tad Davenport was able to detect differences in structure between diverse HIV strains.  Those differences affect the way the virus infects immune cells and how the immune system responds to attack.

The scientists are working with Dr. Julie Overbaugh, an investigator at the Fred Hutchinson Cancer Research Center, to determine what makes certain HIV strains more likely to be transmitted.

“We think specific characteristics of the virus’ envelope protein structure and stability may affect whether it is transmitted.  If we can discover what makes these transmitted viruses unique, we can also determine how they might be uniquely vulnerable to vaccines and other defensive therapies.”

With a grant from the Bill & Melinda Gates Foundation, the lab will collaborate with Shiu Lok Hu’s group in pharmaceutics to improve HIV vaccines.

“Structural biology plays an increasingly important role in rational drug design,” said Hu.  “Most of our past knowledge about HIV proteins came from studying them in static, crystallized forms.

“Kelly’s work is unique because he uses a combination of approaches to examine the structure of viral proteins and their dynamic properties in action.”

Added insight into the biological properties of these viral proteins can lead to advances in vaccine and drug design to fight influenza and HIV.