His winding path, from ranch to forefront of stem-cell science

His winding path, from ranch to forefront of stem-cell science

Chuck Murry likely would've been a cancer researcher had he signed up earlier for one lab class. Instead, today he repairs hearts.
Heather VanDusen Wilson
02/29/2016 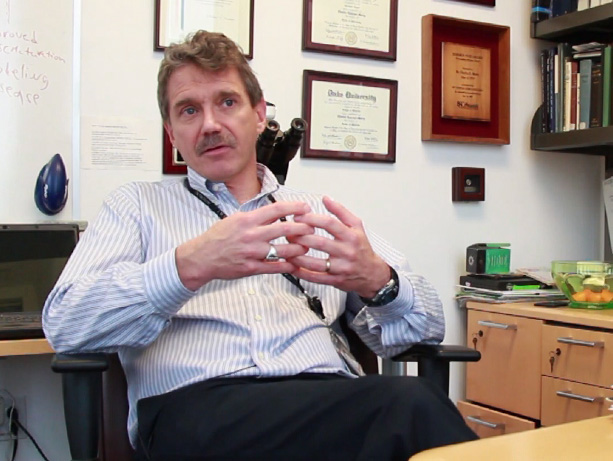 Few people have made a greater impact doing something "not in the national interest" than pioneering heart-disease researcher Chuck Murry.

Murry saw the path to research during a basic science rotation in his third year at Duke University medical school. But since he was on an Air Force scholarship, he needed the government's blessing to follow the Ph.D. path. They refused, citing the national interest.

“I loved science, but laboratory-based research work seemed too tedious,” Murry said. "Then I found out what it was really like – chasing a question, solving a mystery and putting puzzles together. That was something I wanted to put my mind toward.”

He faced a difficult decision: Follow his heart and get a Ph.D., which meant dropping out of med school, losing his scholarship and running the risk of being called to active military duty, or stay with his plan.

“I quit medical school and made the bet that they would discharge me rather than call me to active duty. It was a time of peace, enlistment levels were high, and I had no useful skill as far as they were concerned,” he said.

The gamble paid off. Murry was discharged and free to pursue graduate school. He went on to earn his doctorate in pathology, then returned to finish med school the next year.

The skills that the military saw as useless would eventually become valuable in the fight against heart disease, which kills more people each year than all cancers combined.

Medicine had captivated Murry at an early age. He grew up in North Dakota, where his family raised horses. Spending time outside working with these animals gave him an appreciation for all living creatures. And he felt called to public service.

Life had not always been easy for his family. During the Great Depression, his maternal grandfather died suddenly and the family lost their farm.

“My plan was to go become a physician, a surgeon actually, and move back to North Dakota. The unstated goal for my parents was to bring honor to the family name,” Murry said.

That all fell by the wayside when he embraced research and found he could make a difference in people’s lives through science.

He intended to study cancer, but the cancer lab he wanted was full. As an alternative, he chose the lab of one of his favorite professors, who happened to study the heart.

“I went into this heart research lab, and it was one of those trivial decisions that made a huge change in the trajectory of my life."

Serendipity had put him on the path to studying heart disease, a disease that had affected his own family.

Murry lost his grandmother to a heart attack when he was a child – something he believes would have been survivable with today’s technology. His mother also suffered from coronary heart disease, but survived two heart attacks thanks to treatments discovered in the years after his grandmother's death.

Murry became instrumental in discovering new therapies that could help those with his same family history. He founded the Heart Regeneration Program at UW Medicine; his lab develops stem-cell therapies to combat the effects of heart disease.

Recently his team demonstrated that damaged heart muscle in non-human primates can be repaired with human stem cells.  If upcoming clinical trials succeed, this therapy might transform the treatment of heart failure, prolonging the lives of people who have suffered major heart attacks and improving their quality of life.

Although his mother recently died from complications of heart disease, Murry feels grateful and proud that science added years to her life.