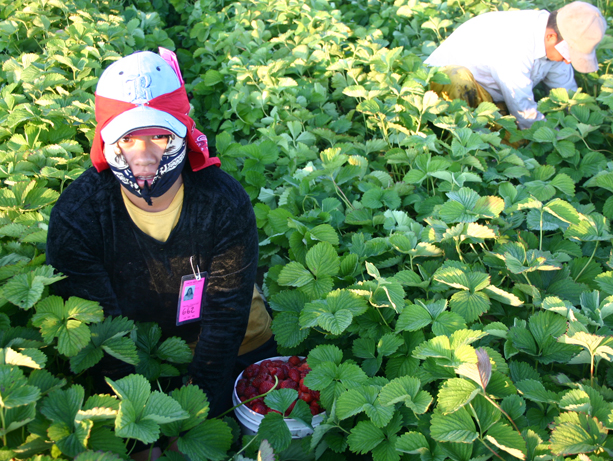 Seth Holmes, a physician and anthropologist, picked strawberries with farmworkers in Washington State and couldn’t meet the minimum requirements to keep this low-paying job. Yet he is considered a skilled worker, and those farmworkers who spend all day hunched over, kneeling and filling buckets of berries faster than most people, are considered unskilled workers.

Holmes, author of “Fresh Fruit, Broken Bodies: Migrant Farmworkers in the United States,” spent five years of research in the field with undocumented Mexicans. And the fact these workers are considered unskilled makes him incredulous.

“They are skilled. But society is not defining them as skilled,” he said in delivering the Health Sciences Common Book keynote Feb. 9 to a packed Kane Hall on the University of Washington’s Seattle campus.

Holmes researches undocumented workers because their lives are subject to powerful forces of inequality, and they suffer high rates of morbidity and mortality, he said. Agricultural workers, he said, have five times the mortality rate of the general public and by the time they are in their 30s and early 40s, many of their bodies are worn out. He said only 5 percent have health insurance.

“These farmworkers in a sense are sacrificing their own health and their own bodies so the rest of us can be healthy."

Holmes spent two summers working with Trique-heritage (of Oaxaca, Mexico) farmworkers in Washington, then traveled with workers to Madera County, Calif. He shared a three-bedroom home with 19 people.

He later moved to Oaxaca, Mexico, and traveled with 10 workers who got caught at the U.S. border. (They were deported; he was fined).

Holmes tells the farmworkers story from an economic and personal level.

The North American Free Trade Agreement (NAFTA), passed in 1994, eliminated government tariffs on goods, but rich countries like the United States and Canada were still able to subsidize farmers. As a result, he said, small farms in Mexico went bankrupt. The collapse of farming in Mexico has sped the pace of illegal emigration to the United States.

During his presentation, Holmes told the story of a Trique father of four who works on the Tanaka farm in the Skagit Valley, which produces strawberries, mostly. The man’s knee was giving him acute pain so he asked for lighter work. He was told, “No porque no.” (No because no).

In the hierarchy of farm-working, berry-picking is near the bottom, and Triques are least-favored in terms of who gets what job. When Holmes asked crop managers why Triquis were directed to pick berries and not the better-paying job of picking apples, he was told, “Oaxacans are low to the ground and like to work hunched over. Mestizos have too many pains working in the field.”

Holmes wants healthcare professionals to understand the forces that cause sickness.

His book was chosen as reading material for all UW health sciences students this year because of the importance of agriculture in Washington and the need for broader education across disciplines about social determinants of health, said Kelsen Caldwell, a program manager with the Health Sciences Service Learning and Advocacy Group.

“How can we expect [health-sciences] students to be community-literate if they are not educated?” he said.

The keynote was one of nine events about farmworkers' health. Earlier in the day, people watched the documentary “Food Chains” and heard from farmworkers in Skagit Valley who are fighting for $15 minimum wage, health care, being paid by the day not the piece, and better working conditions. In Washington state, farmworkers are excluded from labor laws, including minimum wage. The Affordable Care Act does not cover migrant workers.