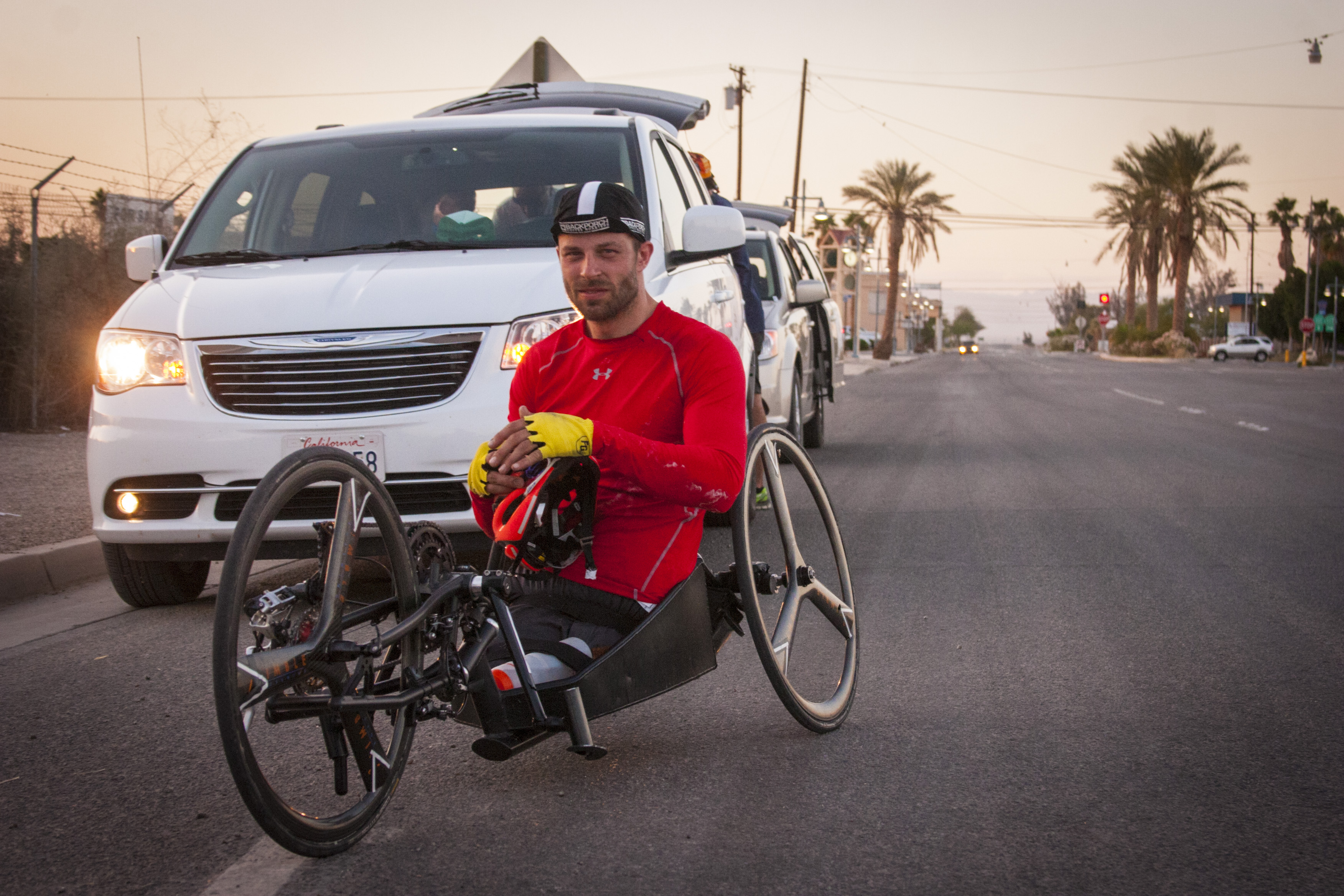 André Kajlich has the perfect race mapped out in his head: Start at the lowest and end at the highest point on all seven continents. Traverse the distance between both points by swimming, climbing and biking.

“The first one would be Africa,” he said. “No one’s ever done that.”

Kajlich is no stranger to mentally and physically daunting challenges. He’s an Ultraman and Ironman World Champion, to name a few of his titles. He completed an ultramarathon in Brazil that took him through 60 hours and 135 miles of rugged, often muddy terrain, and up a 33,000 foot elevation gain. He’s overcome many obstacles. His biggest accomplishment?

Kajlich races with a hand cycle, but walks on prosthetic legs. More than a decade ago, while in Prague, he was out one night for drinks with friends.  As he neared the tracks of railway station, an oncoming train struck him.

He doesn’t remember much of the accident, other than waking up in a hospital intensive care unit, where he remained for two months.

After his condition stabilized, he was flown to Seattle and admitted to Harborview Medical Center.  Douglas Smith, an orthopedic and orthopedic trauma surgeon, closed his wounds and reconnected his tissues, muscles and ligaments.

Kajlich had lost one of his legs above the knee and the other at the hip joint. Amputations at the hip or pelvis are extremely tough to live with, according to a physician-written article in the Amputee Coalition.

At first there was a chance Kajlich wouldn’t be a candidate for prostheses, or even be able to sit.  He proved otherwise.

“His balance is amazing,” said Susan Spaulding, one of Kajlich’s prosthetists at the UW Medicine Prosthetics and Orthotics Clinic. “He’s extremely disciplined and mentally strong.”

Kajlich has returned to the clinic many times for prosthetic refittings. Prosthetic service isn’t a one-time thing: It’s ongoing throughout someone’s life.  Weight gain or loss and many other factors can make a difference in how the prostheses work with someone’s body.

Kajlich calls his prosthetists “masters of the interface between people and materials.” They make highly customized pieces for him, he said, both because of his type of amputations and because of his racing.

Many prosthetists have never seen someone at Kajlich’s level, which is why he visits UW prosthetics and orthotics classrooms and helps students learn how to work with patients like him.

Spaulding said she is cautiously supportive of his athletic pursuits.

“I’m impressed with him, his desire to push himself to the max. Then from my clinical perspective, I’m worried about his long-term shoulder health,” she said.

Kajlich got into racing randomly after meeting two men with amputations like his who participated in a charity race. After attending the race, he was hooked and joined the following year. Racing has taken him all over the world.  He hopes to qualify for Race Across America next year.

Kajlich works at the UW Center on Outcomes Research in Rehabilitation. He also meets with people who have above-the-knee amputations like his.

He does this, he said, because, “I was once in the position of starving for that information, some example or someone to look to.”

He is also a motivational speaker. He said he’d like to work more with people with disabilitieswho live in other countries, places that don’t offer the same opportunities as the United States. He’d also like to be in more races that aren’t solely for disabled athletes.

Bryan Myss
“I’m always the not-normal person doing the race, which is cool because you always get reactions,” Kajlich says. “I beat a lot of the guys on bikes."
picture of Andre Kajlich biking on a road

“I’m always the not-normal person doing the race, which is cool because you always get reactions,” he said. “I beat a lot of the guys on bikes. It’s not just that they give you respect, it’s that they know exactly what you’re doing because they’re doing it themselves.”

Yet, he also observed, “There’s always a lot of qualifiers used when a disabled person does something.”

Racing has been rewarding in a lot of ways that surprised him.

“It’s revealing when you’re out there,” he said.  “You’re creating this conflict or challenge. It’s not something you have to go through, but it does present an interesting mental obstacle that I think provides clarity in other aspects of life.

“It’s uncomfortable, more than anything, which is sometimes what you need.”