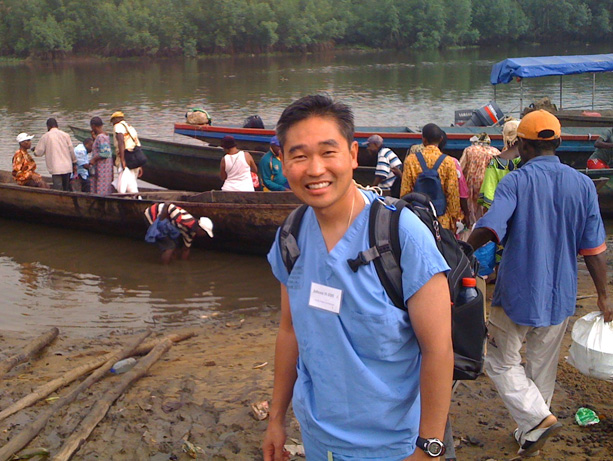 When Sherwin Shinn of Gig Harbor, Wash., traveled to Uganda a few years ago, he didn’t go for the sightseeing.

“We set up our portable equipment in an open-air shed on the edge of a volcanic crater-lake where hundreds of locals were mining salt from the brackish water,” says Shinn, a 1974 graduate of the UW School of Dentistry who has performed dental humanitarian missions for decades.

“The workers were covered with sores, and waded in corrosive water in oppressive heat. Then the wind came up, blowing concentrated sulfur dioxide fumes from the volcano across the lake onto our faces and into our noses. It reacted with our sweat and immediately turned to sulfuric acid. The wind also showered us with the blood and bacteria-laden spray from our drills and [teeth-cleaning equipment]. We persevered until dark, but the biochemical cloud, clammy, slimy skin and chaotic crowd control combination kept us wondering what we had gotten ourselves into and how we would ever get out unscathed.”

Despite the difficulty of such missions, Shinn and other UW dental alumni find enormous rewards in volunteer trips abroad.

“I go a couple times a year because it centers me spiritually,” says Jeff Parrish of Kirkland, Wash. “Visiting and living with people who have so little reminds me to quit complaining and recognize how blessed I am.”

Year after year, UW dental alums fan out across the globe to deliver dental care to people in desperate need. They have gone to the Philippines, Cambodia, Honduras, Nicaragua, Tibet, Haiti, Bolivia, Mexico, Kenya, Guatemala, Nicaragua, Bangladesh, the Dominican Republic and elsewhere. Often they face primitive and dangerous conditions.

Some volunteers are driven by religious convictions.

"Now, as in the beginning, I was motivated by my faith,” says Michael Karr, who retired three years ago after 30 years of practice in Granite Falls, Wash., and has gone on foreign missions for two decades. “I have always believed that God did not give me these skills for my own use and enrichment, and I have had no regrets giving back to these people who have nothing.”

Other dentists have different motives. “I don’t consider these trips altruistic missions, but rather a way to experience a culture more deeply by working directly with the people,” says Patricia Rothwell of Seattle, who has gone to Guatemala and Uganda. And as Karr acknowledges, “I am driven by adventure.”

Volunteers also speak of immense professional satisfaction. Mark Paxton of Spokane has journeyed to Ecuador, Colombia, Honduras, Guatemala and Mexico with different groups, and since 1990 has worked with the Hearts in Motion charitable organization to perform cleft lip and palate surgery. He is also helping to influence a new generation of volunteers, taking several UW dental students on most of his missions.

“It is the absolute best thing I do as an oral and maxillofacial surgeon,” Paxton says.

Missions often test a dentist’s fortitude. On one trip, Parrish had to use a flashlight as he worked in a small room with no electricity or hand piece. “[The] first patient was quite squirmy when I anesthetized him because he had a gun in his back pocket that he was lying on,” he says. “[I] took it out and set it on the table next to my instruments. I was very careful to see that he was numb!”

“Chasing chickens, dogs, pigs, monkeys and other animals from our clinic areas, which are sometimes outside, or often in dirt-floored houses or churches, is not an unusual occurrence,” says Richard  Quinn of Renton, Wash. “Many times we have had hundreds of people waiting for us when we arrive at a clinic site, often two or three hours’ ride over rutted dirt roads from our base in San Ramon [ Nicaragua]. Generator power and working into the dark are not unusual, and one time we ran out of gas for the generator while working.”

Says Paxton: “I can handle the bugs, the lack of bathrooms and toilet paper, the geckos on the ceiling in the operating rooms, the difficulty in equipment and sterilization supplies, logistics of equipment and supplies, the ever-present [stomach] distress of traveling in Third World countries. But when I am trying to do a long OR case and you have surgical attire on with hats, booties and gowns and it is 115 degrees out with minimal to no air conditioning, it tends to suck the energy out of me.”

Despite the conditions, volunteer dentists work hard to uphold standards of professional care. As Quinn says, “Working in primitive circumstances does not mean being a ‘cowboy’ when it comes to basic sterilization, surgical techniques, basic patient comfort and the human connection in spite of language differences.”

These missions pose harsh and even tragic realities, and demand resilience.

Paxton recalls having to tell numerous parents that their child was too sick – often from anemia or parasites – to undergo surgery.

“I am very sure that some of these kids or infants were so sick that if we had tried to accomplish the patient’s surgery, the patient would not have done very well or potentially died during or shortly after surgery,” he says. “I also know that when I sent some of these young kids and infants home, they most likely died at home due to progression of their disease or complications in the young patients and their inability to eat and have adequate nutrition.”

In the end, though, what endures is far greater than any painful regrets, these dentists say.

“We all search for something valuable in life,” says Alison Han of Redmond, Wash., who has made multiple trips to Nepal. “I think these experiences brought me tremendous rewards and moments to help me cherish my own life.”

Johann Yi of Bellevue, Wash., who has visited Honduras, Mexico, Cameroon and Jamaica, says, “The most rewarding part of the trip is seeing children’s faces just light up when we give them small prizes. I have three children, and it’s heartbreaking to see kids suffer in poverty. … When you are exposed to extreme poverty, you begin to realize how blessed you are.”