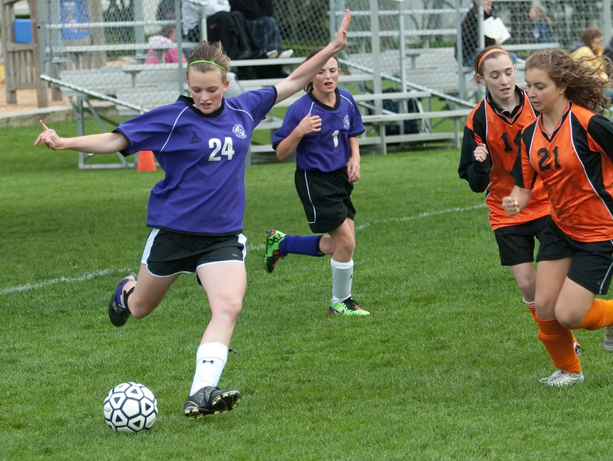 Concussions are common among middle-school girls who play soccer, and most continue to play with symptoms, according to a study by John W. O’ Kane, M.D., of the University of Washington Sports Medicine Clinic, Seattle, and colleagues.

Using an email survey and interviews, the authors evaluated the frequency and duration of concussions in young female soccer players, as well as whether the injuries resulted in stopping play and seeking medical attention. Their study included 351 soccer players (ages 11 to 14 years) from soccer clubs in the Puget Sound region of Washington.

The findings are reported Jan. 20 in JAMA Pediatrics. The study was supported by a grant from the National Institute of Arthritis and Musculoskeletal and Skin Diseases.

He and Schiff found a higher rate of concussion among middle school soccer players than has been reported among high school and college soccer players.

“Young athletes who get a concussion tend to underreport or minimize it because they don’t want to be taken out of play,” Schiff said. “Unless they tell their coach about it, coaches often aren’t aware of what happened.”

Part of the problem may be that many concussed players don’t recognize symptoms. Concentration problems, headache, and dizziness were the most commonly reported symptoms in the study.

Playing through concussion makes people more vulnerable to getting hit again, and having longer and more severe symptoms. A second blow can cause a rare condition known as second-impact syndrome, which can result in severe injury or death.

Luckily for Kristina Serres, a high school soccer player, her coach noticed she was feeling disoriented after back-to-back impacts and took her off the field immediately.

“I felt dizzy and disoriented, and was wobbling around,” Serres said. “My mom said I was slurring my words and would stop in the middle of what I was saying.”

The next day, she went to the UW Medicine Sports Medicine Center, where O’Kane diagnosed a concussion and prescribed rest.

Serres had experienced two types of head blows common in soccer: a collision with another player and redirecting the ball with her head. Schiff and O’Kane found that, among study participants, more than half received concussions from contact with another player, and 30 percent occurred when players headed the ball.

Schiff and O’Kane emphasized the crucial role education plays in preventing concussed players like Serres from returning to the game and reinjuring themselves.

“We need more education for children, as well as parents and coaches, about what a concussion is and what the consequences can be if it isn’t taken seriously,” Schiff said.

Note to reporters: A copy of the JAMA paper is available to the news media at http://media.jamanetwork.com/