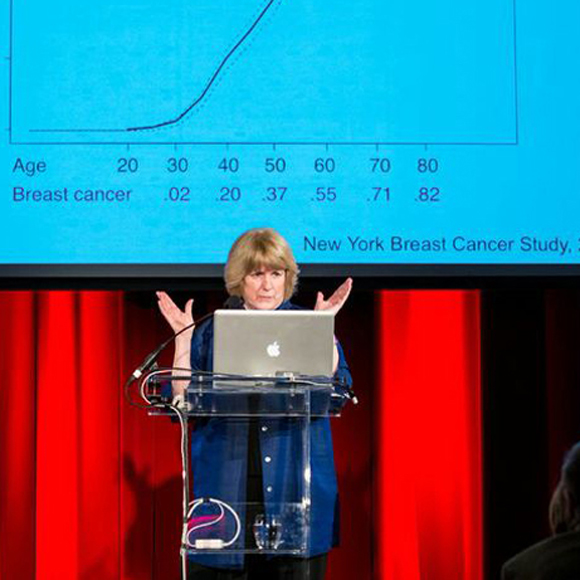 The University of Washington and UW Medicine announced today that Mary-Claire King, Ph.D., UW professor of medicine (medical genetics) and genome sciences, will receive the 2014 Lasker-Koshland Special Achievement Award in Medical Science. The Albert and Mary Lasker Foundation award is one of the most prestigious scientific prizes; the Special Achievement Award recognizes exceptional leadership and citizenship in biomedical science. The award will be presented Sept. 19 in New York City.

The foundation is honoring King for “bold, imaginative and diverse contributions to medical science and human rights. ... Her work has touched families around the world.”

King is a world leader in cancer genetics and in the application of genetics to resolution of human rights abuses. She was the first to demonstrate that a genetic predisposition for breast cancer exists, as the result of inherited mutations in the gene she named BRCA1. More recently she has devised with Tom Walsh, UW associate professor of medical genetics, a scheme to screen for all genes that predispose to breast and ovarian cancers.

She has applied her genetics expertise to aid victims of human rights violations around the world. Beginning in the 1980s, King helped to find children in Argentina taken from their families during the military regime of the late 1970s and early 1980s. She developed an approach based on mitochondrial DNA sequencing that led to the reunion of more than 100 children with their families.

The same approach has been used to identify American soldiers missing in action from the Vietnam War, Cambodia, Korean War and World War II, as well as to identify remains of victims buried in mass graves in Rwanda, the Balkans and Central America.

“Mary-Claire King has a long list of accomplishments in the field of medical genetics and she is so deserving of the Lasker Foundation award,” said Robert H. Waterston, chair of UW's Department of Genome Sciences.

“What has always impressed me about Dr. King is her determination, fueled by the people she wants to help. The idea that breast cancer could be related to a specific gene was not widely accepted, yet Dr. King continued to pursue that path and she pushed for the implementation of genetic tests in the clinic, pushed with others to make that information free and available, and pushed against patents in the field – succeeding on all fronts.

"She has extended her methods into other areas of genetics like schizophrenia and inherited deafness. Her work is certainly bold, imaginative and diverse, and I congratulate Dr. King on receiving this prominent recognition.”

Dr. Paul G. Ramsey, CEO of UW Medicine and dean of UW's School of Medicine, said, “Dr. Mary-Claire King richly deserves this honor from the Lasker Foundation. We are proud that she is a member of the University of Washington faculty, and congratulate her on receiving this prestigious award. Dr. King’s scientific contributions, her genuine interest in the people she is helping, and her fearlessness to stay the course have forever changed the way people think about human genetics.”

About the Lasker Awards
The Lasker Awards are among the most respected science prizes in the world. Recipients of the Lasker Medical Research Awards are selected by a distinguished international jury chaired by Joseph L. Goldstein, recipient of the 1985 Lasker Award for Basic Medical Research and the Nobel Prize in Medicine. Lasker Laureates receive a citation highlighting their achievements and an inscribed statuette of the Winged Victory of Samothrace, the Lasker Foundation's traditional symbol representing humanity's victory over disease, disability, and death. Eighty-six Lasker laureates have received the Nobel Prize, including 47 in the past three decades. More details on the Lasker Award recipients, the full citations for each award category, video interviews and photos of the awardees, and additional information on the foundation are available at www.laskerfoundation.org.