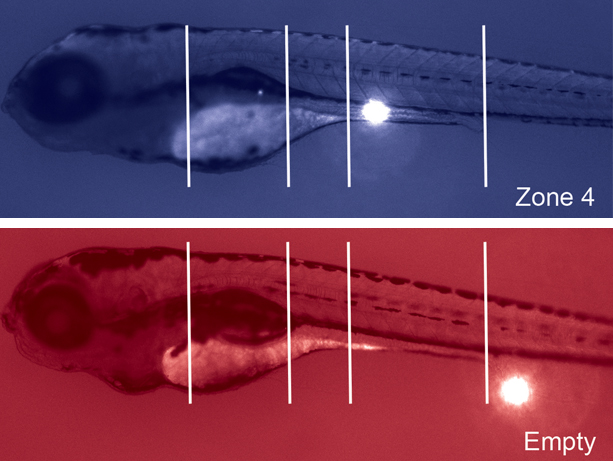 A variation in the CHD8 gene has a strong likelihood of leading to a type of autism accompanied by digestive problems, a larger head and wide-set eyes.

“We finally got a clear-cut case of an autism-specific gene,” said Raphael Bernier, University of Washington associate professor of psychiatry and behavioral sciences and clinical director of the Autism Center at Seattle Children’s. He is one of the lead authors of a Cell paper published today, “Disruptive CHD8 Mutations Define a Subtype of Autism in Early Development.”

Scientists at 13 institutions around the world collaborated on the project.

Autism may have many genetic and other causes, and can vary in how it affects individuals. Currently autism is diagnosed based on behavioral traits.

Today’s discovery is part of an emerging approach to studying the underlying mechanisms of autism and what those mean for people with the condition. Many research teams are trying to group subtypes of autism based on genetic profiles.
The approach could uncover hundreds more genetic mutations. Genetic testing for the various forms eventually could be offered to families to guide them on what to expect and how to care for their child.

In their study of 6,176 children with autism spectrum disorder, researchers found 15 had a CHD8 mutation. All the cases had similarities in their physical appearance as well as sleep disturbances and gastrointestinal problems. Bernier and his team interviewed all 15 of the children.

To confirm the findings, the researchers worked with scientists at Duke University who study genetically modified zebrafish, a common laboratory model for gene mutation studies. After the researchers disrupted the fish’s CHD8 gene, the small fry developed large heads and wide set eyes. They then fed the naturally semi-transparent fish fluorescent pellets to observe their digestion. They found that the fish had problems discarding food waste and were constipated.

Bernier said this is the first time researchers have shown a definitive cause of autism from a genetic mutation. Previously identified genetic conditions like Fragile X, which accounts for a greater number of autism cases, are associated with other neurological impairments, such as intellectual disability, more than with autism. Although less than half a percent of all people with autism will have this subtype, Bernier said this study has many implications.

“This will be a game changer in the way scientists are researching autism,” he said.

In the short term, Bernier said, clinicians can pay attention to the small population with this CHD8 mutation and provide targeted treatment.

Researchers say autism has currently been linked to several different types of genetic events. The most commonly researched ones are chromosomal re-arrangements, called copy number variations, in which a segment of DNA is repeated or deleted. But no one rearrangement affects more than 1 percent of all autism cases. While certain copy number events are associated with autism, they do not have a definitive link.

Then there are genetic mutations in which a gene has been disrupted and is not coding for the right kind of protein. The CHD8 gene mutation appears to be the first of this kind to be strongly linked to a certain subtype of autism.

The project was supported by the Simons Foundation Autism Research Initiative (303241,239983), the National Institutes of Health National Institute for Mental Health (R01MH10122), a NARSAD Young Investigator Grant, and by a European Commission GENCODYS grant. Eichler is an investigator with the Howard Hughes Medical Institute.