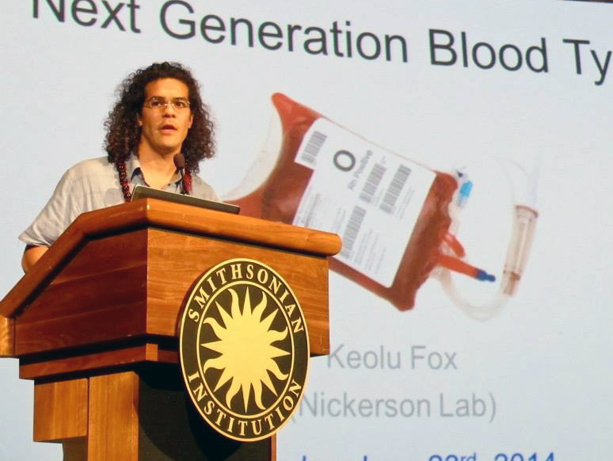 As a young teenager standing at the top of Mauna Kea, Hawaii’s tallest point, Keolu Fox experienced relativity for the first time: The Milky Way’s endless expanse stretched out overhead, a vision that not only humbled him but also changed his perceptions of math and science.

Today he is a Ph.D. candidate in genomics at the University of Washington, an outspoken indigenous scientist and a 2016 TED Fellow.

His Polynesian family has been on the island of Hawaii for generations, and he holds close the ideal of ahupua’a—maintaining your valley— a way of life developed five centuries ago by King Umi-a-Liloa. The concept informs Fox’s values, his philosophy and his work.

Kim Blakeley
Fox, a native Hawaiian, has teamed with other indigenous scientists from around the world to create a resource for tribes that want to be involved in health research.
picture of Keolu Fox

“In science you make an observation, take that data and predict something that is going to happen. Then you theorize it; you make a hypothesis. Hawaiians have been doing all of these things for a long time,” Fox said. “Maybe not what Western people consider science but we have a sophisticated understanding of nature and ethnobotany.”

As an adolescent Fox moved to Prince George’s County in Maryland, a primarily African-American enclave of Washington, D.C. “PG,” as he calls it, opened his eyes to “a multi-dimensional disparity.”

“It’s like we’re invisible. If majority-minority people don’t participate in research, indigenous and minority people won’t benefit from it, either.”

Indigenous people, Fox said, have been oppressed from fully participating in scientific research. They desire and deserve to be honored for what they know, and to be involved in each step of the Western process – from grant writing through the experiment through writing the paper.

“The technology is now so readily available that the cost of genome sequencing is approaching the cost of having an MRI. We are moving from reacting to medical health states to predicting and preventing them, providing personalized therapy with patient participation. But when you look at the people whose genes are sequenced, what is the proportion of nonwhite?”

To initiate change, Fox has teamed with other indigenous scientists to create a nonprofit coalition of policy resources for tribes that want to get involved in research, on their terms.

What started out as a private journal club for indigenous grad students – two genome science doctoral candidates and a master’s candidate in pharmacogenomics (Navajo, Kanaka Maoli, and Purhepecha, respectively) – has blossomed into a diverse group of experts; they are graduate students, academics, lawyers and politicians from the Pacific Northwest, currently numbering nine and growing.

The next step, Fox said, is to find a permanent facility to store and analyze data, and to educate the public about the genomics of indigenous people.

Students pursuing science and research at elite academic institutions are expected to know how academia works. Yet most indigenous students don’t know that they need first author papers, have never conducted experiments, never written code, so they need a lot more upfront attention.

“The model isn’t broken, it just doesn’t support the indigenous students who have high potential for paradigm shifting, for revolutionary science, and for engaging and maintaining their indigenous communities—their ahupua’a. I was lucky: My boss took a huge risk on me.”

It’s hard to remain relevant for a long time in science, Fox said. His goal is to ensure “indigenomics,” a term he coined, is not just a moment but a movement. Ultimately he would like to start an indigenomics institute to foster a culture in which Western ideas can be recombined with indigenous knowledge to create novel solutions to unprecedented questions.

This, he said, is a new niche in genomics and one he is proud and excited to spearhead.

“I am sending up a ‘bat signal.’  Hey indigenous people, look at what I’m doing. Let’s band together and create a new culture for innovation. Let’s recombine our ideas with Western ideas and be progressive. Let’s indigenize the technology and put it in the hands of the people.”