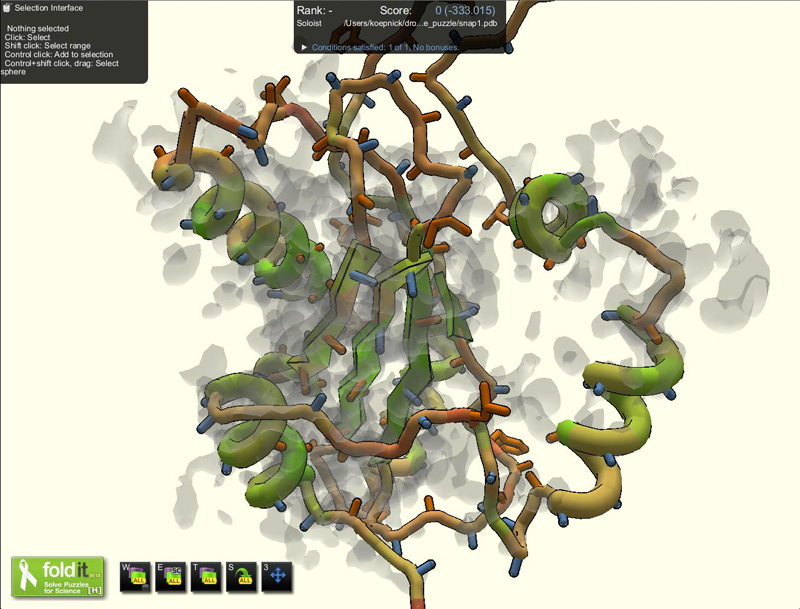 The study findings, to be published Sept. 16 in Nature Communications, demonstrate how nonscientists can help advance science and highlight the value of computer games in learning.

“The puzzle involved a task that can be labor-intensive and error-prone. We think it’s significant that crowd-sourced Foldit players can do [the task] as well as, or better than, professional crystallographers,” said Brian Koepnick, one of the study’s lead investigators.

Every bodily function involves proteins, so understanding how proteins work is important to biology and to medicine. Protein molecules start out as a chain of chemicals that fold into shapes that determine their roles. The contest puzzle challenged participants to interpret biochemical data to discover a protein's structure.

The students and professionals worked independently, as is the norm for scientists engaged in model-building. The winning video game players, however, worked more collaboratively.

“Many of our Foldit players have no scientific training. They are puzzle-solvers; they like to tinker and work a problem,” Koepnick said. “Some are in it for the game and for high scores. Others are motivated to contribute to science.

“Foldit is a very direct way of contributing to science without reaching for the checkbook and without the commitment of graduate school.”

The gamers' victory suggests that Foldit’s game interface, which is more engaging than Coot’s technical presentation, makes a difference, too.

Co-author Scott Horowitz, a postdoctoral fellow at the University of Michigan, said he plans to integrate Foldit into his class. He believes it will motivate students to learn about a very complicated subject.

"I've seen how much players learn about proteins from playing this game," Horowitz said. "We spend weeks and weeks trying to jam this into students' brains.  Foldit players learn it naturally because it's fun."

The study's authors say their next step is to incorporate the gamers' tips and tricks into the software that scientists use when building these structures. Human-designed protein molecules may someday solve a number of health, environmental and energy problems.

The researchers also said that analysis of the protein targeted in the competition also uncovered a new family of proteins. These may have a role in preventing plaque formation, which is implicated in diseases such as Alzheimer's.