At Harborview, a show of artworks might tweak your perspective toward people with dementia-related conditions
Genevieve Wanucha
04/04/2016 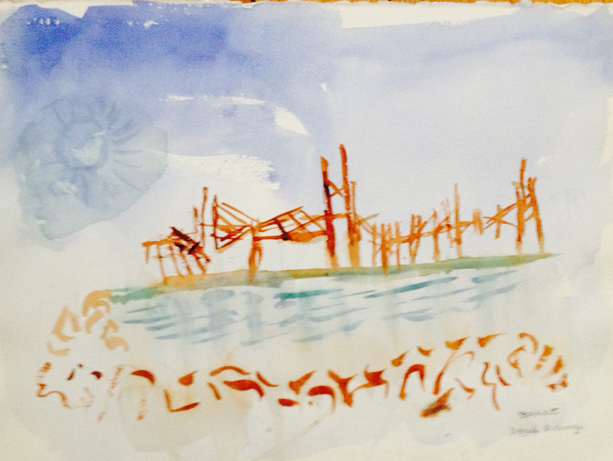 An art exhibit at Harborview Medical Center shines light on Seattle’s progress in becoming one of the nation's leading dementia-friendly cities.

The exhibit (through May 25) shows off 50 works created by people with conditions that lead to dementia. It is presented by the nonprofit The Art of Alzheimer’s with support from the UW Medicine Memory and Brain Wellness Center.

“When my mom started with Alzheimer’s, I was a reluctant caregiver, I’m sad to admit,” Raichle said. “And then Mom began to paint. I was fascinated that this woman who had never painted a day in her life was producing extraordinary art. I could see that she was still living with invention and wit and joy. It changed my whole way of thinking about dementia. These people are still vital human beings with creative gifts.”

She hopes the exhibit will encourage viewers to find more hope and less despair in diseases that diminish memory.

The works on display come from individuals in the community and those who attend art-based programs in Seattle, such as the adult day center Elderwise and studio classes offered by the Frye Art Museum.

The artists often use watercolor as a medium because paint applied to wet paper spreads into visually striking shapes, bringing form from color rather than forcing someone with memory loss to make something happen on a blank page.

“The art gives me the extremes to feel higher up. So high – I mean, I nearly hit the ceiling,” said Franklin Stone, a former pediatrician and current Elderwise participant who contributed a painting of what he said might be a plate of fruit.

Dr. Tom Grabowski, a UW professor of radiology and neurology and director of the Memory and Brain Wellness Center, suggested how a disease such as Alzheimer’s might also engender a new freedom of expression.

“I think it’s important to recognize how much remains intact, such as sensitivity to textures, colors, and emotion, as attested by [the] art,” Grabowski said. “What’s happening, I think, is that the self-critic can be quieted and the artistic impulse, a human quality, can emerge and come to the fore. From a neurologist’s perspective, that’s remarkable.”

The issue at hand is Seattle’s growth into one of the leading dementia-friendly cities in the nation – meaning an inclusive, supportive, and hopeful place for people living with memory loss. As this exhibit testifies, Seattle offers a wealth of arts-engagement programs and opportunities for recreation, social connection and volunteerism.

The exhibit, Marilyn Raichle said, has blossomed beyond what she had imagined would be a one-time show with the City of Seattle. Prospective future venues include Seattle’s Folklife festival, the city of Yakima, Washington, the University of Hawaii, and Washington University in St. Louis. She wants to pitch it to the Cooper Union in New York.

“It should go around the world,” Raichle said.

The Art of Alzheimer’s is on display through May 25 in the main cafeteria at Harborview Medical Center.