Diagnoses and guidance, with nothing lost in translation

Diagnoses and guidance, with nothing lost in translation 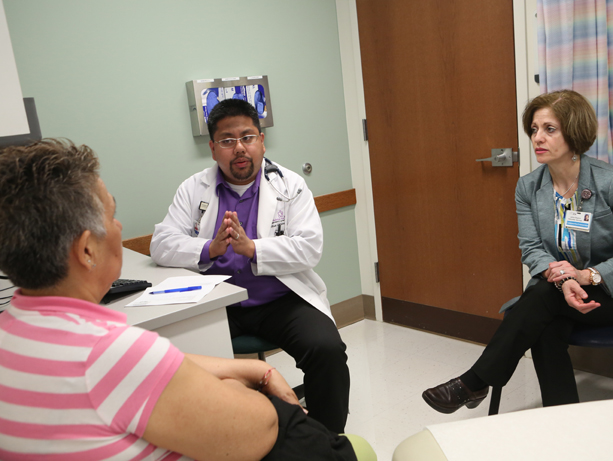 “Is it two lumps or three? Is it already diagnosed? How do you know? What kind of cancer is it? Don’t you need a biopsy to be sure?”

“These are all very good questions,” Lacsina told the women. “I want to make sure we explain it so that you understand.” He paused so medical interpreter Gammada Abraham could translate his words into Somali.

Lacsina studied his patient and her family’s faces as they grasped the weight of his responses: Their mother has liver cancer.

“Today is really tough,” Lacsina said later. It was his first day back at the International Medicine Clinic at Harborview Medical Center after completing a medical rotation in Kenya, and he had to deliver two cancer diagnoses.

Such moments play out in more than 70 languages and dialects at the International Medicine Clinic, which provides care for adult refugees and immigrants. Harborview Medical Center opened the clinic in the 1980s to deal with an influx of people from Southeast Asia. Today its caregivers serve patients from all over the world, representing dozens of cultures, the majority from East Africa, Southeast Asia and China. Nearly all need interpreters.

For many of Lacsina’s patients, the clinic is their first exposure to medicine. They have no documented family health history, and the idea of preventive medicine can seem nonsensical.

“Why do you need to go to the doctor when you feel fine?” many patients ask.

Another challenge is figuring out a patient’s real age. Some don’t know their birth year, and Jan. 1 is a commonly listed birthday.  That was the case with Lacsina’s first patient of the day, from Ethiopia. Her record said she was 94. She told Lacsina she was 80. Her son said she was 100.

Lacsina’s interest in infectious disease initially led him to pursue a career in medicine. The challenge of helping the most vulnerable populations guided him to global health.

“I’ve never liked narrowly focused problems,” he said. “In global health you are dealing with sociology, economics, politics and ethics. These problems have a lot of different dimensions.”

He will return to Kenya this summer for his chief residency at the Naivasha District Hospital, this time with his wife and newborn child.

Despite his training in both the United States and abroad, one aspect of the job that never gets easier, he said, is delivering tough news, regardless of the language.

That same day, Lacsina’s last patient was a woman from Egypt. The Arab interpreter was assisting with another patient so Lacsina conferenced in an interpreter by phone to speak with his patient.

It was the second cancer diagnosis of the day.

“I don’t know what to do,” she told Lacsina after hearing the news.

“It’s a difficult situation,” he said and put his hand on her shoulder. “It’s completely normal to feel overwhelmed.”

She looked up and responded, “I will fight.”