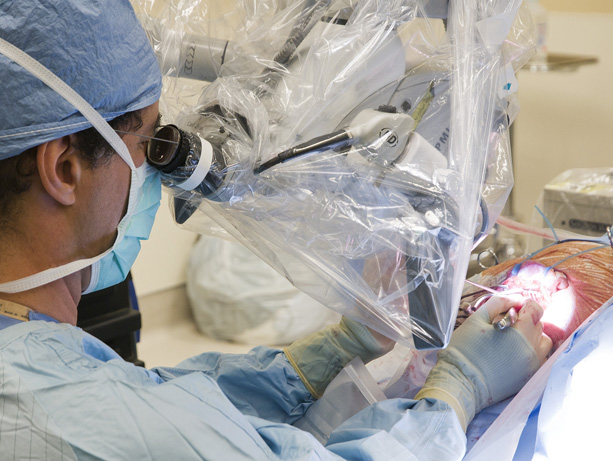 Between 2010 and 2012, Dr. Jay Rubinstein and colleagues implanted an investigational device behind an ear of four patients with Meniere’s disease. The high-tech device was intended to stave off the debilitating bouts of vertigo that challenge people with Meniere’s and other vestibular disorders.

Today all four have no Meniere’s attacks, but not because the intervention worked as hoped. All four lost their hearing in the affected ear as a consequence of the surgery – a potential outcome that the patients understood before the procedure.

The initial vestibular implant, above, has been re-engineered to include an additional lead to connect to a cochlear implant (not pictured). Each of three-pronged electrodes attaches to different sites on the inner ear.
Picture of the device implanted in four Meniere's patients

“The vestibular implant was designed to restore balance without causing hearing loss,” said Rubinstein, UW professor of otolaryngology-head and neck surgery and of bioengineering. “We were hoping that they would continue to have Meniere’s attacks and that the device, when activated, would suppress the attacks. Instead, they gave up hearing in one ear to get their attacks to stop.”

(It’s the same tradeoff made by many Meniere’s patients for whom medication does not provide relief; they opt to undergo a procedure in which the surgeon destroys the affected inner ear to halt the confounding signals that create dizziness. People with one functional ear can relearn how to balance, walk, drive and so on – akin to piloting a 737 with one working engine.)

The surgical trial, originally scoped for 10 subject patients, was suspended after the four failures. Rubinstein said he thinks the procedures failed because Meniere’s ears, evidence suggests, are particularly susceptible to surgical injury.

“We still believe we can put this device into a non-Meniere’s ear without losing hearing or balance,” he said, pointing out that the surgical trial also aimed at a solution for people who have any number of balance disorders unrelated to Meniere’s.

Nonetheless, Rubinstein and colleague Dr. James Phillips have re-engineered the device based on data derived from the four implants, even as they became inconsequential for the patients’ balance. Critical information emerged, Rubinstein said, from both the implant and the external component, which senses the head’s acceleration in three dimensions and transmits electrical signals to the implanted piece.

“We’ve modified the design. Patients will now get a cochlear implant in addition to the vestibular implant; data suggests patients will hear better than they did before the procedure. So we will stop their attacks, restore their hearing and generate more subjects to demonstrate that the device works better than the previous version. We’re on to device 1.2.”

Rubinstein’s continued research in this area depends on additional grant funding and a modification to the investigational device exemption from the Food and Drug Administration, he said.