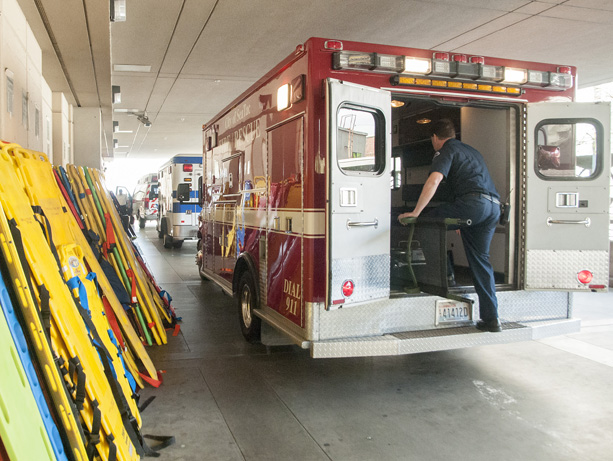 Certain heart rhythm medications, when given by paramedics to patients who had failed electrical shock treatments for out-of-hospital cardiac arrest, improved the likelihood of surviving transport to the hospital, a major study has confirmed.

The study helps answer a long-standing scientific question about the effectiveness of two widely used antiarrhythmic drugs, amiodarone and lidocaine, in treating suddent cardiac arrest. The results are published April 4 in the online first edition New England Journal of Medicine, and were concurrently presented during the annual meeting of the American College of Cardiology in Chicago.

Read the paper and the accompanying editorial, "Out-of-hospital cardiac arrest -- Are drugs ever the answer?"Although neither drug significantly improved the overall rate of survival, as measured by the percentage of patients who were later discharged from the hospital, amidarone showed a favorable trend.

"this trial shows that amiodarone and lidocaine offere hope for bringing patients back to life and into the hospital after cardiac arrest," said principal study investigator Dr. Peter Kudenchuk, a UW Medicine cardiac electrophysiologist. "While the overall increase in survival to hospital discharge of about 3 percent with amiodarone was not statistically significant, it came pretty close. Importantlyt, there was a significant improvement in hospital survival to discharge with either drug when the cardiac arrest was witnessed by a bystander."

During a sudden cardiac arrest, the heart suddenly stops beating. As a result , blood is no longer flowing to the brain or other vital organs. More than 300,000 people are treated for out-of-hospital cardiac arrest each year.

Most of these occur at home, according to the American Heart Association. Studies show that, nationally, only about 10 percent of people who suffer a cardiac arrest away from a hospital survive. Effective treatments, such as CPR and defibrillation, can greatly increased the odds of survival.

This study points to the possibility of additional benefit from the use of the heart rhythym medications. Emergency medical service providers commonly use antiarrhythmic drugs for out-of-hospital cardiac arrest that does not respond to defibrillation shocks to the heart intended to restore normal rhythm.

However, doctors remain unclear whether these drugs have proven survival benefit, or if any benefit might be undone by possible drug side effects. As a result of this uncertainty, use of these drug treatments by paramedics varies.

The three-year study reported today began in 2012. It randomized 3,026 patients with out-of-hospital cardiac arrest caused by ventricular fibrillation and ventricular tachycardia.  These life threatening problems, which affect the pumping action of the heart's lower chambers, are often resistant to electrical shock treatment.

Researchers assigned the patients to treatment with amiodarone, lidocaine or a saline placebo by rapid injection. The patients also received all other standard resuscitation treatments. The Resusciation Outcomes Consortium, which includes clinical research sites across the United States and Canada, conducted the study. Emergency medical services in 10 communities, including Seattle and King County, participated in this trial.

"Survival among the approximately 1,900 patients in the study whose cardiac arrest was witnessed by a bystander was improved significantly, from about 23 percent to 28 percent, by either drug," Kudenchuk said. More than half the study participants fit this bystander-witnessed category. The researchers suspected, before the study began,  that this group would be more likely to respond to such treatment.

"The results suggest that treating patients as soon as possible after their collapse might be a critical determinant of whether drugs like amiodarone or lidocaine will have a significant clinical efffect, " he added.

"I'm encouraged by the fact that though seemingly small, the 3 percent to 5 percent increase in survival reported in this trial means 1,800 more lives could potentially be saved each year from cardiac arrest," he said. We can and should strive to improve treatments for this all-too-common event.  We believe that this study is a significant step in the right direction."
[Listen to a 9-1-1 call involving CPR]

The study was funded by the National Heart, Lung, and Blood Institute of the National Institutes of Health, American Heart Association, U.S. Army, Canadian Institutes of Health Research and Defense Research and Development Canada.The study was coordinated by the Clinical Trials Center at the University of Washington.  The entire community of Seattle-King County participated in the trial, which was performed by the Seattle and King County Emergency Medical Services known as Medic One.

This story is based on a news release issued by the National Institutes of Health/National Heart, Lung and Blood Institute.