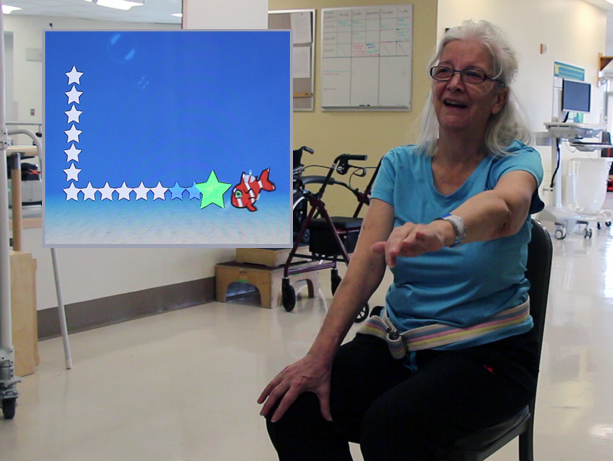 With effort and purpose, Deanna Theiss raised her arm, then glided it down and across her body, watching intently as a cartoon fish mirrored her movements on a TV monitor several feet away.

Theiss, recovering from a stroke, was playing a video game – a single-player activity, really – that may give a glimpse into the future of rehabilitation therapy.

So far, about 15 Harborview patients have tried the software as a supplement to in-clinic therapy sessions. Patients play the activities at home and have statistics about their progress electronically sent to their doctors.

That number could jump to 30 or 40 within a year, said Dr. Aaron Bunnell, the rehabilitation medicine physician who is piloting Harborview's test of the technology.

“The system addresses many areas of rehabilitation, from decreasing neglect of one side of the body to improving attention and balance. It offers additional tools for the therapist and gives patients more therapy time. In-person sessions are expensive and not always covered by insurance, so getting to do some rehabilitation exercises at home is a great supplement,” Bunnell said.

Theiss spent about a month and a half in rehabilitation after a stroke damaged her brain’s ability to communicate with her limbs, and recently returned to Harborview for a second round of therapy. She overcame initial ambivalence and took to the activities immediately.

"I actually like this,” she said after playing the fish game and another in which she maneuvered her avatar, a skier, through slalom gates. “It’s interesting and fun. I’ve been wanting to do more stuff at home anyway, and I’ll want to do this again.”

Activities can be tailored to each patient's sensorimotor deficits, and they self-adjust based on the accuracy of a patient’s movements.

Bunnell thinks the technology might motivate patients to make time for therapy exercises. “Humans like games,” he said. “It’s more engaging than sitting in a room and having a therapist ask you to raise your hand. It’s also more realistic: Patients have to pay attention to time and respond to cues in the game’s environment.”

Jintronix has created an assortment of activities that guide exercise.
picture of a selection of video game titles

The system hasn’t produced any hiccups yet for the patients who tested it. The doctors and patients trying the software do so on their own time, as no formal agreement exists between UW Medicine and Jintronix.

Currently, the testing is subjective with limited data to support any conclusions, but that will soon change.

Bunnell and Brian Snitily, a resident specializing in physical medicine and rehabilitation, are designing a study, to begin this winter, to collect data about whether the technology is safe and well-tolerated by patients. If that study has favorable results, other studies would follow to measure whether rehabilitation software makes a meaningful difference in patients’ recoveries.