When Kelsey Deschamps was 16, she learned about a blood vessel abnormality in her brain stem
McKenna Princing
10/06/2014 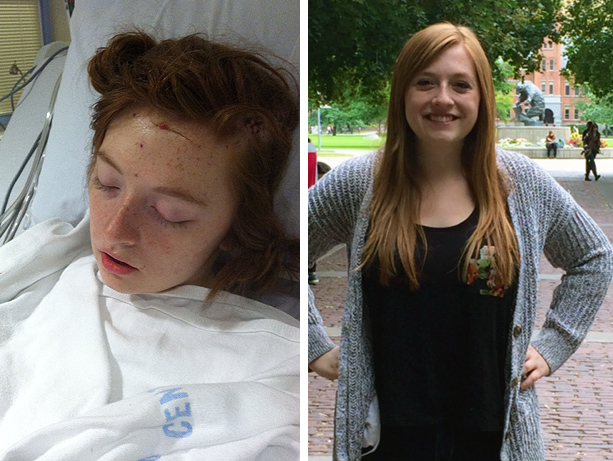 While her high school peers were going to classes, making friends and adjusting to the rhythms of a new school year, then-senior Kelsey Deschamps from Florence, Mont., was undergoing surgery at Harborview Medical Center. Her doctors removed an abnormal formation of blood vessels in her brain stem that  had been slowly growing and threatening permanent damage. The brain stem is inside the base of the skull and communicates with the spinal cord. It controls life-sustaining functions like breathing and heart rate.

The condition, called a cavernous malformation or cavernoma, affects one in every 100 to 200 people, according to estimates from the American Association of Neurological Surgeons. Cavernomas consist of groups of misshapen, leaky blood vessels and can cause headaches, seizures and, more rarely, hemorrhage. Many people with cavernomas experience no symptoms.

Deschamps kept getting colds and noticed persistent sinus problems during her sophomore year of high school. She visited several doctors, all of whom prescribed allergy medications without success. Eventually, a magnetic resonance imaging scan, or MRI,  revealed the cavernoma. Her doctor in Montana referred her to neurosurgeons at Seattle Children’s, who monitored the malformation for two years and realized it was growing.

The family was referred to Dr. Laligam Sekhar, UW professor of neurological surgery and a UW Medicine brain surgeon. By that time, Deschamps’s symptoms were worsening: Her face twitched and her hands tingled. Sekhar recommended surgery to remove the cavernoma and Deschamps agreed. It happened to be the beginning of her senior year of high school.

“I tried to convince Kelsey to wait, but she was determined. She told me she was going to do the surgery, but she didn’t want to drop any of her AP [Advanced Placement] classes,” mom Leanne Deschamps remembered.

The surgery took nine hours. During the eighth, Sekhar came into the waiting room to tell Deschamps’s parents that the auditory nerve for her left ear was no longer responding. The cavernoma, now removed, had been attached to the nerve.

“Brain stem cavernomas are particularly dangerous because they have a greater tendency to bleed. The brain stem is a difficult area to operate in without creating major problems such as coma, paralysis, difficulty with walking or coordination, and other serious disabilities. Nonetheless, removal by working one small section at a time seems to be the best type of treatment for a cavernoma in that location,” Sekhar said.

Deschamps has permanent hearing loss in her left ear, but otherwise recovered well; though — not unexpectedly for a brain surgery patient — the weeks after her procedure were difficult. She experienced what she calls “sensory overload,” and had to relearn how to write coherently. Taking walks meant stopping every few minutes to rest.

Despite this, she completed schoolwork at home and, two months after the surgery, returned to school. True to her word, she passed her Advanced Placement classes and graduated salutatorian. In September, she began her freshman year as a pre-pharmacy major at the University of Montana. She also celebrated the first anniversary of her cavernoma being removed.

“It was hard to come back from surgery; there was pressure I never had to deal with before,” Deschamps said. “I didn’t want people to know I was having a hard time.”

She is continuously learning how to adapt to her hearing loss by using tips from her therapist, such as looking directly at someone who’s talking and sitting in the front of a classroom.

According to Sekhar, there’s a possibility the cavernoma could come back in a different area of the brain, especially if Deschamps has one of the three genes that predict cavernoma formation. He recommended to Deschamps that she get an MRI every one to three years, just to be safe.

Though Sekhar and Deschamps’s parents are quick to praise her, she is modest. When prompted to talk about her what kept her determined throughout surgery and recovery, she said simply, “I’ve been that way my whole life.”