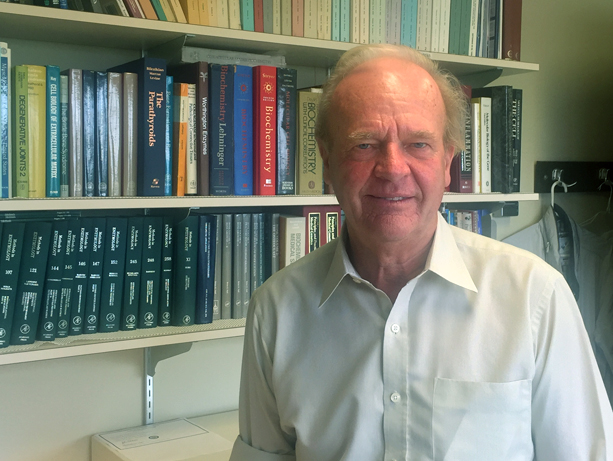 David Eyre, University of Washington professor of orthopedics and sports medicine, was named the 2015 UW Medicine Inventor of the Year for pioneering a diagnostic test to measure bone loss.  He will be recognized Nov. 5 at a ceremony at South Lake Union.

Eyre has spent a half-century researching the biochemistry of collagen, a protein polymer that forms the essential framework of our bones and cartilage. He developed the diagnostic in 1985 based on biomarkers, a technology ahead of its time. Thirty years later, his tool, called Osteomark NTx, is widely used by pharmaceutical companies to analyze the effectiveness of drugs in slowing bone turnover and preventing loss.

He answered a few questions about the discovery.

Q. How did you get involved in this area?

A. I grew up in the United Kingdom and trained at Leeds University. My first degree was in biochemistry and I went on to a  Ph.D. in biochemistry. My thesis was on mineralized tissues of teeth which led me to a post-doc at Harvard in 1969 to work with a leader in the field running one of the most advanced orthopedic labs in the world.  I thought I was going to work on dental enamel but he advised me, “You are going to work on collagen.”  Basic collagen research led to the insights and technology for Osteomark.

Q. How does Osteomark work?

A. Osteomark detects accelerated bone loss by measuring a specific protein fragment of bone collagen called NTx. This molecule is produced as bone is broken down continually in the body and replaced by new bone growth. As people age, the rate of resorption tends to exceed the rate of replacement, leading to conditions like osteoporosis.

ThinkStock
An artist's illustration of osteoporosis. Scientists don’t fully understand the process by which osteoarthritis destroys joints and why some people can stop the destruction and others can’t, Eyre said.
x-ray of adult hands

During resorption, NTx is released into the bloodstream and eventually secreted in the urine. We created simple assays to quantify the rate that bone was being broken down on a daily basis. The test relied on the unique structure of peptides from bone collagen for which we (the University of Washington) were awarded a series of patents.

Q. What was your vision when you came up with the test?

A. We originally thought our highly specific test might replace or augment the standard clinical methods that physicians use to diagnose bone loss. But the healthcare industry wasn’t ready to abandon X-rays and bone scans. Clinicians initially used our test as a supplementary diagnostic.  But in the last 10 years, pharmaceutical companies have become major buyers of Osteomark.  It’s also one of the leading biochemical measures that physicians use to diagnose metabolic bone disorders.

Q. Once you are diagnosed with bone loss, then what?

A. Once patients are identified with high turnover of bone, there are drugs that can target and slow the turnover and increase bone mass. A range of such drugs reduce risk of fracture by 50 percent.

Q. So for all those people with bad knees, why is it so hard to come up with a replacement for joint cartilage?

A. We don’t fully understand the process by which osteoarthritis destroys joints and why some people can stop the destruction and others can’t. There is a debate about whether degeneration begins in bone or cartilage. Putting stem cells in a bad joint won’t do much if the degeneration process continues. That’s why the best treatment for people with worn out knees and hips is still a replacement joint.

Going forward, biological solutions are most likely to involve early detection by advanced imaging or biomarkers and the advent of agents or treatments that slow progression of joint destruction.