Blood sugar drives brain's response to the sight of food

Blood sugar drives brain's response to the sight of food

In study of identical twins, influence of genetics and upbringing appear to have limits
Michael McCarthy
07/29/2014 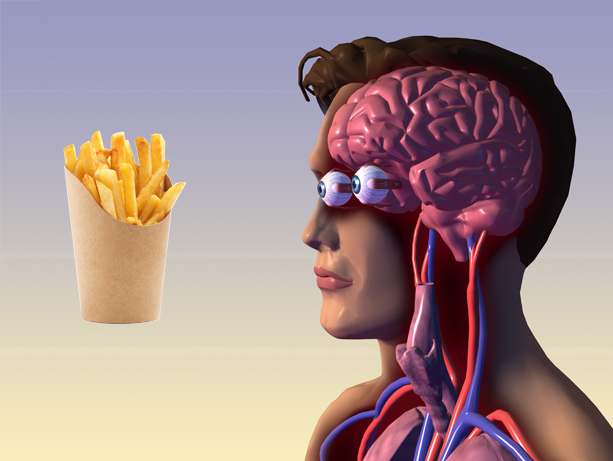 Our brain’s response to the sight of food appears driven more by our blood sugar level at the moment than our upbringing or genetics, research from the University of Washington suggests.

“The finding suggests our brains have a way to override genetic inheritance, upbringing and habits to respond to our immediate nutritional needs,” said Dr. Ellen Schur, UW assistant professor of medicine. She presented the data at the annual meeting of the Society for the Study of Ingestive Behavior, in Seattle.

Studies of identical twins have shown that genetics and upbringing play major roles in a person’s body-weight regulation. In this study, the researchers wanted to determine what role inherited similarities in brain function had on appetite.

The researchers hypothesized that because identical twins have nearly identical genetic inheritance, their brain appetite centers would respond similarly to images of high- and low-calorie foods.

The researchers enrolled 21 pairs of identical (monozygotic) twins who had been raised together. The twins ate a standardized breakfast and, three and half hours later, underwent a baseline fMRI brain scan.

With fMRI, the researchers assessed how activity of appetite-regulating centers in their brains changed in response to the images. Afterward the twins were offered to eat their fill from a buffet; how much they ate was recorded.

At regular intervals during the experiment the twins were asked to rate their feelings of hunger, fullness and satisfaction, using a standardized scale, and blood samples were taken to measure levels of glucose and regulatory hormones, such as insulin, leptin and ghrelin.

The twin pairs gave similar responses when asked to rate their appetites before and after meals, and had similar hormonal responses, and even ate similar amounts from the buffet — findings that suggest these responses were influenced by their shared upbringing and genetics.

But brain activation in response to the food images differed: Response tended to be greater in the twin with lower blood-glucose levels.

The findings, Schur said, suggest that while genetics and upbringing play a big role in how much we weigh and how much we normally eat, our immediate response to food is driven by our bodies' need for nutrition at the time.