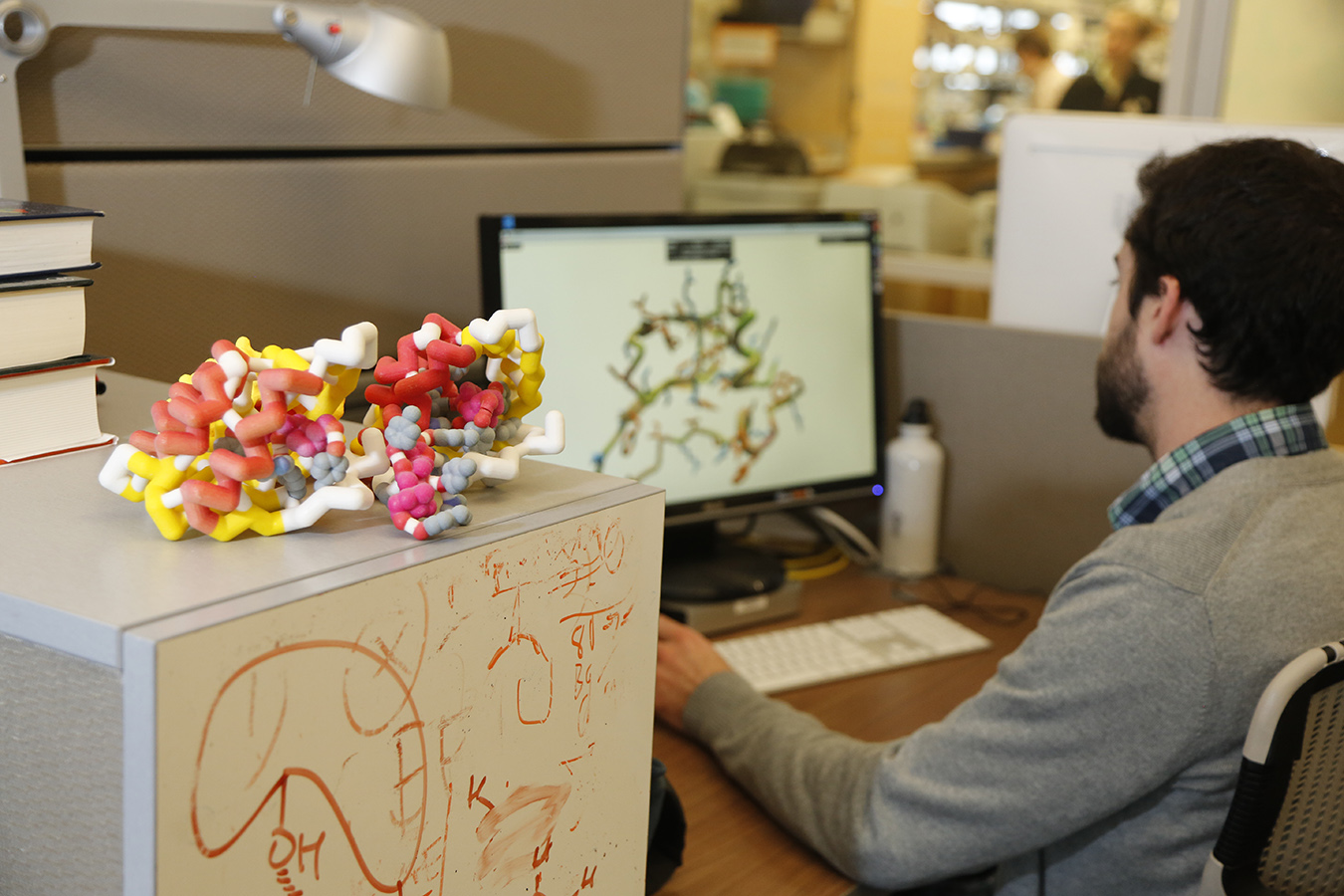 The potential of modular design for brand new proteins that do not yet exist in the natural world is explored Dec. 16 in the journal Nature. The reports are the latest in a recent series of developments toward custom-designing proteins.

Naturally occurring proteins are the nanoscale machines that carry out nearly all the essential functions in living things.

The Nature letters look at one type of natural construction: proteins formed of repeat copies of a structural component.  The researchers examined the potential for creating new types of these proteins.  Just as the manufacturing industry was revolutionized by interchangeable parts, originating protein molecules with the right twists, turns and connections for their modular assembly would be a bold direction for biotechnology.

The letters are, “Exploring the repeat protein universe through computational design” and “Rational design of alpha-helical tandem repeat proteins with closed architecture.” The findings suggest the possibilities for producing protein geometries that exceed what nature has achieved.  The work was led by postdoctoral fellows TJ Brunette, Fabio Parmeggiani and Po-Ssu Huang in David Baker's lab at the University of Washington, and Lindsey Doyle and Phil Bradley at the Fred Hutchinson Cancer Research Institute in Seattle.

In addition, over the past several months, researchers at the UW Institute for Protein Design (IPD), Fred Hutch, and other institutions have described several advances in two longstanding problem areas in building new proteins from scratch.

“It has been a watershed year for protein structure predictions and design,” said Baker, a UW professor of biochemistry, Howard Hughes Medical Institute investigator, and head of the IPD.

The protein structure problem is figuring out how a protein’s chemical makeup predetermines its molecular structure, and in turn, its biological role. UW researchers have developed powerful algorithms to make unprecedented, accurate, blind predictions about the structure of large proteins of more than 200 amino acids in length. This has opened the door to predicting the structures for hundreds of thousands of recently discovered proteins in the ocean, soil, and gut microbiome.

Researchers have now shown the possibility of doing this with precision for protein folds inspired by naturally occurring proteins. More important, researchers can now devise amino acid sequences to fashion novel, previously unknown folds, far surpassing what is predicted to occur in the natural world.

The new proteins are designed with help from volunteers around the globe participating in the Rosetta@home distributed computing project. The custom-designed amino acid sequences are encoded in synthetic genes, the proteins are produced in the laboratory, and their structures are revealed through x-ray crystallography. The computer models in almost all cases match the experimentally determined crystal structures with near atomic level accuracy.

Researches have also reported new protein designs, all with near atomic level accuracy, for such shapes as barrels, sheets, rings and screws. This adds to previous achievements in designing protein cubes and spheres, and suggests the possibility of making a totally new class of protein materials.

By furthering advances such as these, researchers hope to build proteins for critical tasks in medical, environmental and industrial arenas.  Examples of their goals are nanoscale tools that: boost the immune response against HIV and other recalcitrant viruses, block the flu virus so that it cannot infect cells, target drugs to cancer cells while reducing side effects, stop allergens from causing symptoms, neutralize deposits, called amyloids, thought to damage vital tissues in Alzheimer’s disease, mop up medications in the body as an antidote, and fulfill other diagnostic and therapeutic needs.  Scientists are also interested in new proteins for biofuels and clean energy.

In addition to this week’s report on modular construction of proteins with repeating motifs, here are some other recent developments:

Evolution offers clues to shaping proteins: The function of many proteins tends to stay the same across species, even after their amino acid sequences have changed over billions of years of evolution. Locating co-evolved pairs of amino acids helps calculate their proximity when the molecule folds. UW graduate student Sergey Ovchinnikov applied this co-evolution DNA sequence analysis in an E-Life paper published Sept. 3, 2015, “Large-scale determination of previously unsolved protein structures using evolutionary information.” The effort illuminated for the first time the structures of 58 families of proteins that have hundreds of thousands of additional, structurally related family members.

“This achievement was a grand slam home run in the history of protein structure prediction,” said Baker.

Barrel-fold design:  Baker lab postdoctoral fellow Po-Ssu Huang, together with Birte Höcker at the Max Planck Institute for Developmental Biology in Germany discovered the elusive design principles for a barrel-shaped fold underpinning many natural enzyme molecules.  The custom designed barrels folds, built at the IPD, were presented Nov. 23, 2015, in the Nature Chemical Biology paper, “De novo design of a four-fold symmetric TIM-barrel protein with atomic-level accuracy.” This achievement has opened the door for bioengineers to generate totally new enzymes that speed up chemical reactions by positioning smaller molecules in custom barrel compartments.

Self-assembling apparatus:  Ordered protein arrays along a flat plane are found in bacteria, the heart, and other muscles. Overcoming protein interaction complexities, researchers at the IPD and the Janelia Research Campus of the Howard Hughes Medical Institute programmed proteins to self-assemble into novel symmetric, 2-dimensional sheets of protein lattice patterns.  UW graduate student Shane Gonen in the Baker lab, with his brother Tamir Gonen at Janelia, described their work in the June 19, 2015, issue of Science, “Design of ordered two-dimensional arrays mediated by non-covalent protein-protein interfaces.”  This research has applications for self-assembling protein nanomaterials, especially efficient sensors or light harvesters.

Precision sculpting: Protein designers are continuously refining principles for fashioning ideal protein structures.  A paper in the Oct. 6, 2015, Proceedings of the National Academy of Sciences, “Control over overall shape and size in de novo designed proteins,” further explains methods for systematically varying protein architecture inspired by nature.  Such finesse could optimize designed proteins to take on the proper shapes for  the desired functions. This work was led by Baker lab graduate student Yu-Ru Lin in collaboration with Nobuyasu Koga at the Institute for Molecular Science in Japan.

The IPD has been funded by several federal agencies, including the National Institutes of Health, U.S. Department of Energy, National Science Foundation, U.S. Defense Threat Reduction Agency, and U.S. Air Force Office of Scientific Research, the Washington Research Foundation, the Life Sciences Discovery Fund, as well as through private support.