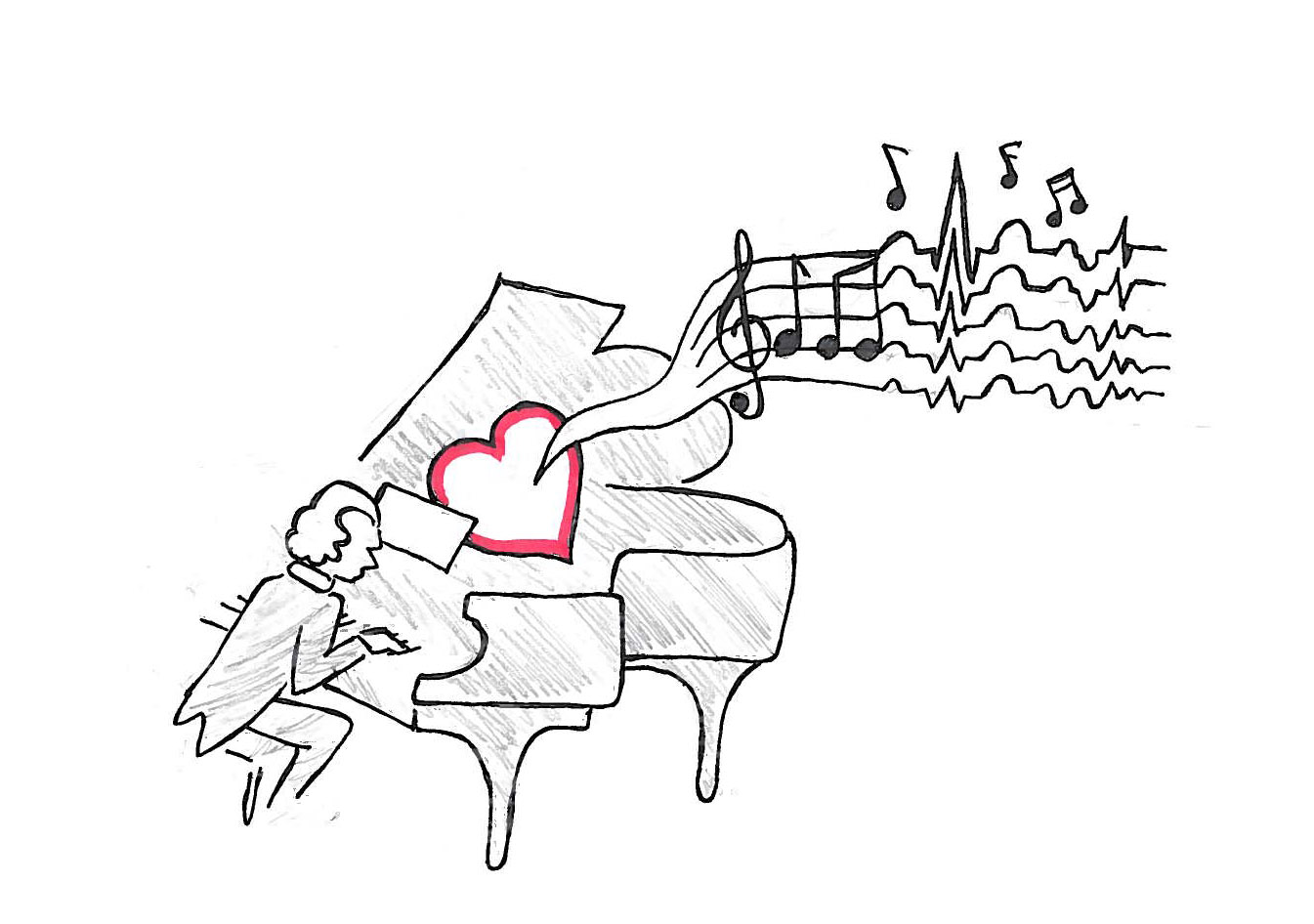 Several of Beethoven’s most painfully moving compositions contain abrupt beat changes and sudden key shifts that resemble cardiac distress.  They sound like a heart that can’t keep up its dull but reassuringly steady lub-dub.

UW Medicine heart specialist Dr. Zachary D. Goldberger noted, “The similarities could have been coincidental.  Several medical and music historians have wondered if Beethoven might have been influenced, consciously or unconsciously, by an unconfirmed heart arrhythmia.”

Ludwig Van Beethoven lived from 1770 to 1827. The list of maladies he is presumed to have suffered is lengthy. Physicians of his era, however, did not have the present day understanding of cardiovascular disease.

“It can’t be proved or disproved that he had a problem with the electrical signals in his heart,” Goldberger said. The electrocardiogram, which detects these signals and records heart beat patterns, had not yet been invented.

He and his colleagues turned instead to Beethoven’s music. The piece most cited as suggestive of an abnormal heart rhythm is the Piano Sonata in E-flat Major, Opus 81a. The first movement was written in 1809, when Beethoven’s close friend and patron, the Archduke Rudolph of Austria, was about to leave Vienna during wartime.

The piece  opens with a farewell horn call, then intones abandonment, lament and questioning. The irregular rhythm registers the physical symptoms of psychological upheaval. The heart races and slows. Beats are skipped.  A few beats come in too early. The heart pauses, as if to correct its timing.  The dread and fear likely in Beethoven’s circumstances, said Goldberger, may have triggered heart arrhythmias.

The music, by replicating the physiological effect, could also make listeners feel anticipation of loss.

“To associate the distinctive rhythm of the melody with an arrhythmia is to give a visceral immediacy to the play of musical symbols,” Goldberger and his fellow essayists wrote.  Beethoven stands out because he was at the vanguard in the shift from classicism to Romanticism. He re-framed old-fashioned public formalities, and introduced original symbols, as if he were speaking from his innermost being to a friend.

“The comparison between the way his music broke the conventional mold and disturbed heart rhythms doesn’t go so far as to confirm that Beethoven had a cardiac arrhythmia,” Goldberger added, “or that an arrhythmia was behind his genius.  Our analysis only adds to the speculation about whether he had this form of heart disease. We are listening to his music with a stethoscope.”

Another Beethoven piece, String Quarter in B-Flat Major, further contributes to the speculation. A short section is marked by a German word meaning both heavy of heart and squeezed. Pianist Jonathan Bliss said the music can be interpreted as expressing pressure in the chest and shortness of breath. This brief segment, according to Goldberg and his fellow essayist, has an unbalance metrical quality. It mimics the paroxysmal fast beat starting in the upper chambers of the heart.  Artistically, the unsettled rhythm evokes uncertainty and disorientation, according to the essayists.  Medically, such rhythms can accompany a momentary drop of oxygen in the heart.

The third piece the essayist examined was the Piano Sonata in A Flat Major, Opus 110.  Medical problems contributed to delays in its composition.  The essayists note that two songs of lament give the sonata unusual structure.  One, they said, contains a breathless melody punctuated by a rhythm akin to an uncomfortably fast heart rate.

Although Beethoven saw several physicians from his early 20s on, Goldberger said it is difficult to interpret the medical descriptions common in Beethoven’s time in the context of modern medicine. The meanings of some terms have changed, most diagnostic tests did not exist, and ideas about causes and manifestations of illness were different then, Goldberger explained.  What does come through in several Beethoven letters are bitter complaints about useless treatments.

If Beethoven indeed had a heart rhythm problem, his deafness could have made him pay more attention to internal sensations.

“Many people are aware of their heartbeat when resting quietly,” Goldberger pointed out.

Goldberger said some of his own patients can tell if their hearts are beating erratically, while others can’t.  Heart arrhythmias are common and associated with many diseases. The constellation of Beethoven’s troubles makes it reasonable to assume, Goldberger said, that he could have been predisposed to irregular heartbeats.
Others commentators purport that these were most likely extra contractions that interrupt the heart’s normal rhythm. Some could argue, Goldberger surmised, that any irregularity, if it existed, could be due to the atria of the heart (the upper chambers) fibrillating, fluttering, perhaps with some sort of heart signal conduction block, or abnormally quick pounding.  Among heart patients today, these are some of the most frequently diagnosed arrhythmias.

“Beethoven may have drawn musical inspiration from what he felt within his own body,” Goldberger and his associates wrote, not just in an emotional sense, “but in a literal sense as he felt the pulsations of his heart.”

“We want to emphasize.” Goldberger said, “that this paper presents a speculation and may offer a new dimension by which one can attend to Beethoven, as well as other works of music. We invite the reader-listener to approach these works with open minds and open ears, and formulate their own opinions. Most important is simply to listen to the music, which speaks for itself and for all of us, in ways that need no translation, nor an electrocardiogram.”

Goldberger specializes in the electrophysiology of the heart. He is noted for researching cardiac arrests in hospitals and for educating physicians in reading electrocardiograms and other heart monitors.  He enjoys jazz and classical music, and has composed and published two albums of solo piano compositions.