Multiple strategies, including teaming up, observed in race to ovum
Michael McCarthy
09/19/2014 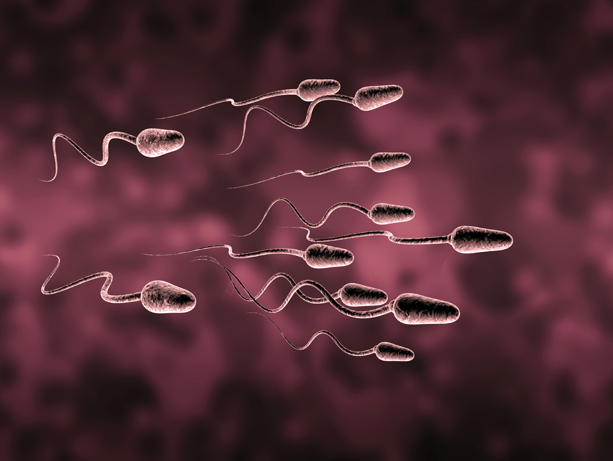 Sperm can change their swimming behavior and even team up with other sperm in ways that may enhance their chances of reaching and fertilizing the egg, a new study suggests.

“We found that sperm have an unexpectedly broad repertoire of swimming behaviors,” said Donner Babcock, professor of physiology and biophysics at the University of Washington and the study's lead author.

“Moreover, sperm can rapidly switch between different swimming modes to change their direction of travel, suggesting they may be able to use this ability to make their way through the female reproductive tract to the egg.”

The study appears in the journal BMC Biology. Co-authors are Petra Wandernoth and Gunther Wennemuth from Duisburg-Essen University, Essen, Germany.

Donner Babcock is research professor of physiology and biophysics at the University of Washington.
picture of Donner Babcock

To reach the egg, the sperm must travel from the vagina through the uterus and up the fallopian tube by negotiating a series of chemical and physical barriers. Although during sex an ejaculation may deposit 100 million or more spermatozoa, less than about 100 of the sperm reach the egg and only one gains entry to complete fertilization. This process of elimination is thought to help select out defective sperm.

“For a long time most people thought the sperm played a relatively passive role, but our findings suggest that sperm may have a number of tactics that allow them to bypass or avoid the snares that the female reproductive tract lays out for them,” Babcock said.

Babcock and his colleagues used a high-speed camera capable of capturing 300 frames a second to record the swimming mechanics of individual mouse sperm as they swam through a fluid-filled chamber.

Sperm are driven forward by an undulating motion of their whip-like tails, but the resulting motion is not quite symmetric and, as a result, sperm tend to veer off sideways.

The researchers found, however, that sperm appear to correct for this asymmetry by rolling along their long axis as they swim.

“Nature has figured out quite cleverly that if the sperm roll, they can balance out the movement and spiral forward, staggering a bit side to side but generally moving forward,” Babcock said. “If they don’t roll, they swim in a circle.”

“By shifting from the regular rolling behavior, they can rapidly change their direction of swimming,” Babcock said. “We don’t know if they can do this in response to external signals, but it is a possibility.”

The researchers also found that some sperm, from time to time, attached to the surface of the testing chamber or to other sperm cells. Attaching to a surface might allow a spermatozoon to stop and wait for a signal, such as an increase in progesterone levels, which rise with ovulation, before swimming on. Also, because sperm also tend to swim off in a new direction when they let go, brief attachments may be another way sperm rapidly change course.

When sperm cells attach to each other, they tended to make more forward progress, the researchers found. In one example, three sperm connected at the head. This trio was able to cover more ground than individual sperm.

“There is other evidence that sperm can cooperate,” Babcock said. “In species where there are polygamous matings and the sperm from several males may be in the female reproductive tract, sperm from one male tend to attach to each more often. In theory, they are teaming up to beat out the sperm from other males.”

Understanding the swimming behavior of sperm may advance the understanding of male infertility, Babcock said.

“About 15% of male infertility is unexplained. It’s possible that defects in the ability of sperm to harness these swimming strategies play a role.”