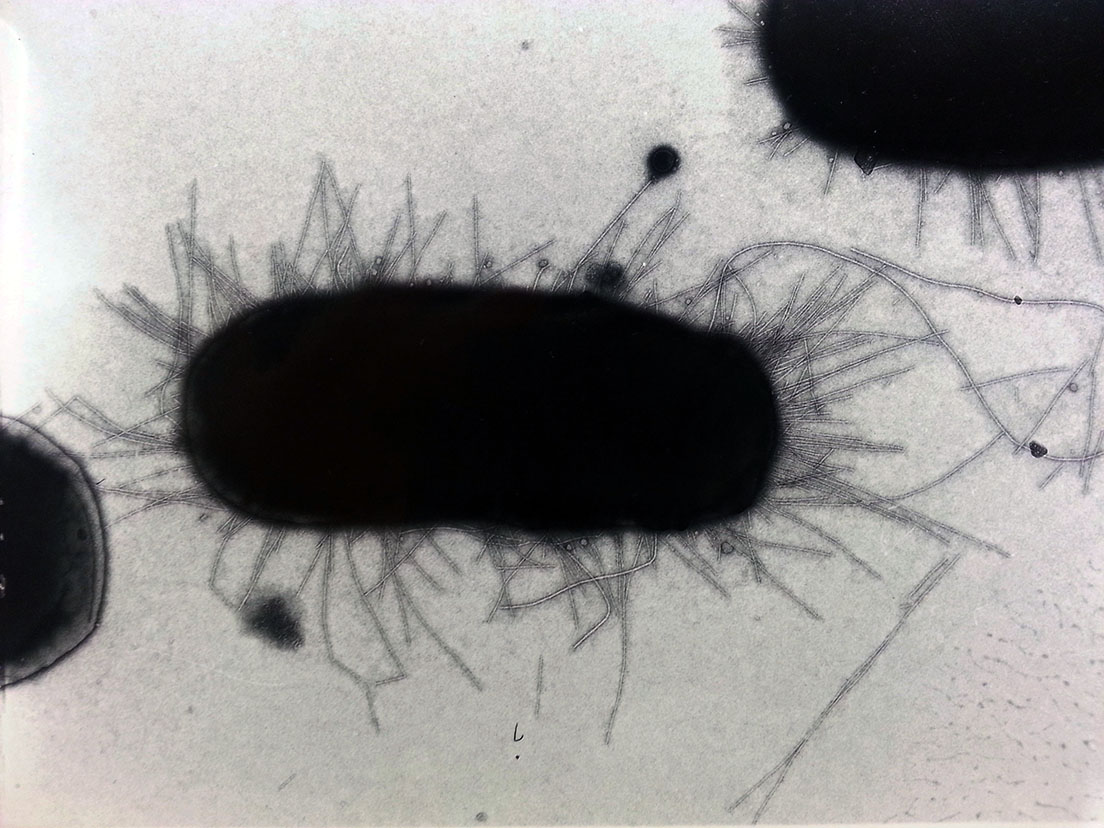 The recent discovery of a novel antibody that works in an unusual way might inspire ideas for designing more effective vaccines.  Among the common pathogens that might be targeted are disease-causing strains of E. coli.  The antibody appears to keep bacteria from adhering to cell surfaces, and also can dislodge those already attached.

In the study, the researchers were looking for antibodies that go after a protein the bacteria E. coli uses to attach to human cells. This attachment is a necessary first step the bacteria must take to cause an infection.

To attach to human cells, E. coli has hair-like structures, called fimbriae, on the end of which sit pocket-shaped proteins. These proteins, called adhesins, grasp and hold onto sugar-like molecules found on the surface of human cells. For many years, researchers have sought to develop a vaccine that would generate antibodies to bind to and block an adhesin called FimH.

E. coli uses FimH to secure itself, via the sugar mannose, to the cells that line the urinary tract and bladder wall.  One vaccine showed great promise in preventing urinary tract infections in animal studies, but failed to protect sufficiently well in humans. Follow-up studies of the disappointing vaccine showed that antibodies generated against the FimH protein could indeed bind to the protein. However, the antibodies couldn’t disable FimH and prevent the bacteria from attaching to human cells.

Kisiela, Sokurenko and their colleagues reasoned that previous attempts at a vaccine fell short because mannose-like molecules floating in the body fluids were occupying the FimH mannose-grasping pocket.  Their occupation shielded the pocket. The immune system couldn’t detect  the site and generate adequate antibodies against it. The researchers tested their hypothesis using a form of FimH with the pocket locked in an open position. This exposed the pocket to the immune system.

The researchers found that the inactivated FimH worked by producing antibodies that bound directly to the inside of the pocket. All these antibodies appeared to work in a classical manner: the antibody essentially competes with mannose for access to the pocket. But, as the scientists had suspected, most of the antibodies were less effective if FimH is already bound to either free-floating or cell surface mannose.

One antibody, however, appeared to work better than the others. This antibody, called Ab926, not only prevented the bacteria from attaching to mannose, but also forced the bacteria that were already attached to let go, something the other antibodies could not do. It turned out mAb926 did not bind directly into the pocket as the others did. Instead, it bound to a side of the pocket. The researcher dubbed this novel mechanism parasteric, meaning “to the side.”

“FimH is like a three fingered hand that closes around the mannose when it binds,” Sokurenko explained. “But the pocket is dynamic and intermittently tightens and loosens its grip.”  This makes sense, he continued, because the bacteria need to be able to release themselves and move if they’re to travel around the urinary tract and invade tissues. In the case of FimH, the loosening takes place when one of the fingers lifts away, momentarily relaxing the pocket’s grip on the mannose. What appears to happen is mAb926 binds to this finger when the pocket is in this relaxed state and prevents it from closing again. As a result, FimH is unable to hold onto the mannose and lets go.

This parasteric action has two advantages over the classical antibody action, Kisiela said. First, unlike the other type of antibodies, this antibody does not have to compete with free-floating mannose for access to the FimH pocket. This means it should be more effective at disabling FimH before it binds to its target. Second, because it can also act on FimH even after bacteria has attached to bladder cells and disable its pocket whenever it relaxes its grip. This raises the possibility that this type of antibodies could be used not only to prevent infections, but also to treat established E. coli infections by loosening the bacterium’s grip so it can be flushed off the wall of the bladder and urinary tract.