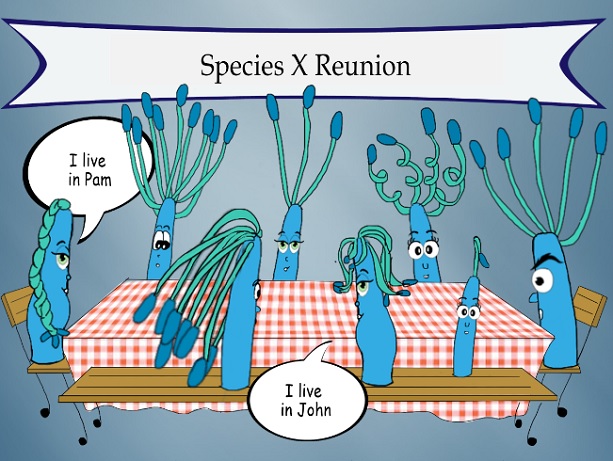 A large community of microorganisms calls the human digestive tract home.  This dynamic conglomerate of microscopic life forms – the gut microbiome – is vital to how people metabolize various nutrients in their food, how their immune systems react to infection, and how they respond to various medications.  Moreover, imbalances in the microbiome are thought to play a significant role in many human diseases.

The collection of species occupying the gut is known to be quite personalized, and people may differ considerably in the set of species they harbor. Now new research suggests that the differences between people may go even deeper. In a paper published Jan. 29 in Cell, researchers at the University of Washington show that even when people share microbes in common, the exact strains each carries might be very different.

“Knowing more about these strain-level variations,” said Elhanan Borenstein, the senior author of this paper and an associate professor of genome sciences at the University of Washington, “is crucial for understanding the complex relationship between the composition of the community of microbes living in the human gut and its influence on health and disease.”

Pinpointing strain variations across gut microbiomes, however, has been a scientific challenge.  Borenstein’s lab studies the human microbiome as a complex system and develops sophisticated computational methods for analyzing microbiome data.  To address this challenge, Borenstein and his team developed a new framework for extensively characterizing strain-level genetic variations across many microbial species prevalent in the human gut. In addition to Borenstein, co-authors of the paper are two members of his lab, graduate student Sharon Greenblum, who spearheaded this project, and postdoctoral fellow Rogan Carr.

Separate strains of the same species of microbe might contrast greatly in the set of genes they encode or in the number of copies of each gene, the authors explained. Certain genes might be absent or present, or might be repeated two or more times, depending on the strain.

Such gene copy number variation can have a major effect on the strain’s capabilities. It can play a role in a strain’s drug resistance, in its virulence, in the kinds of biochemical compounds it can uptake from its environment, in how it breaks down substances for energy, or in its preferred method for getting around. These different capabilities among strains can obviously affect the microbe’s lifestyle, yet many may also translate to consequences for the health of the human host.

“Our computational framework provides a way for estimating the copy number of a given gene in a given species directly from shotgun metagenomic data,” Borenstein said.  He is referring to a genomic sequencing technique for surveying all genes present in a sample containing a complex mixture of microbial species.

Using a novel computational and statistical analysis, Borenstein and his team were able to accurately map each sequence to its species of origin and to estimate the copy number of tens of thousands of genes in scores of gut-dwelling species in the gut microbiomes of more than a hundred individuals.  The researchers then identified more than 5,000 genes spanning dozens of species that had significant copy number variations across microbiomes. In fact, they found such variable genes in every species they analyzed with some species showing variation in almost a quarter of their genes.

In doing so, Borenstein and his team uncovered widespread and previously unobserved variation between strains, and identified the presence of many novel strains of common organisms.

They also looked at the implications of these variations.  They detected several functions that were especially prone to gene copy number variations, including motility, transport of various substances, and energy harvest. These strain variations may reveal how readily and rapidly microorganisms change in response to the gut environment.  Most excitingly, the researchers also found specific instances of strain variation that could have clinical relevance, for example, those that are associated with obesity or inflammatory bowel disease.

Until this study, scientists did not yet have a comprehensive resource documenting the scope of strain variation in the gut or a rigorous method to characterize such variation. They were therefore often forced to ignore the possible impact of variations within species when analyzing the functional repertoire of the gut microbiome and the potential consequences for the person in which it lives.

“We anticipate that the analysis of intra-species variation in the gut microbiome, and the resulting publicly available gene copy-number catalog we provide, will motivate new ways of studying the gut microbiome as a complex, highly adaptive system,” Borenstein and his colleagues wrote.  He added that he hopes this latest research will prompt new questions about the microbial dynamics in the gut microbiome and about potential ways to manipulate the composition or function of the gut microbiome in the management of disease.

The study was funded by a New Innovator Award DP2 AT007802-01 to Borenstein. Learn more about this NIH-funded work in developing a computational framework for manipulation of the gut microbiome.