At 59, she shrank her plate, and her body followed

At 59, she shrank her plate, and her body followed 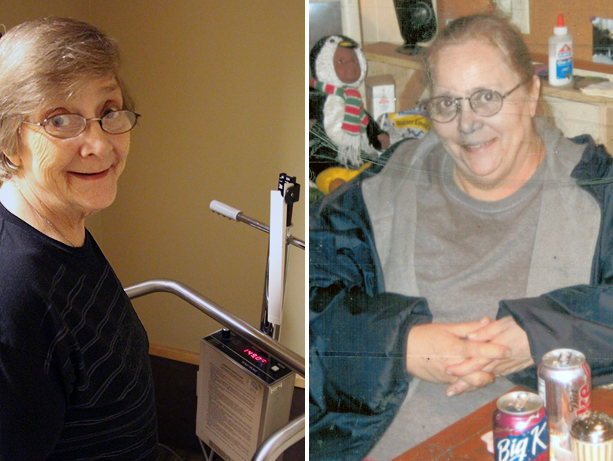 It was 2010 and Carol Whitehead’s energy was dwindling. At age 59, she couldn’t stand long enough to cook a meal. Decades of overeating, chronic leg and spine pain, and the more recent emergence of diabetes – it all tugged Whitehead’s 5-foot, 310-pound frame toward resignation and despair.

But rather than abandon hope, she stiffened her resolve. After all, she had given up alcohol and hard drugs in the early 1990's and had ended a 43-year cigarette habit in 2008. She decided, again, to try to turn away from a lifetime of overindulgent eating.

Brian Donohue
"Larger plates encourage people to load on food, usually starch," said Anne Linge, a registered dietitian/nutritionist with UW Medicine. Half of the dinner plate should be vegetables and the other two quarters are for starch and protein, she said.
picture of UW Medicine nutritionist Anne Linge

It was a feat impressive not only for the loss, at that age, but also for the approach: No gastric bypass or Lapband surgery (too scary, she said). No exercise regimen (bad knees and back). No radical diets (too many past failures).

What made the difference was “downsizing my plate,” Whitehead said.

“My dinner plate is the size of a salad plate, about 9 inches across. Smaller plates trick your brain into thinking you’re eating the same amount because your plate is full,” she said, relating her epiphany.

That grain of insight helped Whitehead, who grew up in the “clean plate club” and learned to cook by making dinner for her folks’ nine-person household, shrink her caloric intake.

In the process, she became a disciple of Anne Linge, a registered dietitian/nutritionist who demystifies healthy meals in less time than it takes to heat water for ramen.

“Researchers have found that what tells us we’ve had enough to eat is our plate is empty or the people we’re eating with have finished. These are external, not internal cues,” Linge said.

Today Whitehead eats anything she wants, but it includes less red meat and more chicken and fish. Nothing in her kitchen is fried; it’s boiled, broiled or baked. The pint of Ben & Jerry’s that once was inhaled in one sitting is now nibbled over a week’s time. She snacks mostly on apple slices, carrot and celery.

“I’m still borderline diabetic, but off medications. You realize you don’t need that much to eat to be full.”

Losing 165 pounds without surgery or exercise makes Whitehead an outlier, she knows.

“Everybody’s surprised. But it happened for me.”

Dr. Kim O’Connor, Whitehead’s primary care physician for more than 10 years, has been instrumental to her patient’s reclamation of health. She helped end Whitehead’s tobacco addiction, then two years later, brought Linge into the picture.

O’Connor also had the idea that Whitehead’s story could inspire UW med-school students to set aside presumptions upon seeing a 300+ pound, 60-year-old patient in poor health and with a history of unhealthy choices.

She has engineered three meetings between Whitehead and hopeful doctors.

“Clearly she’s had a lot of struggles in her life,” O’Connor said of Whitehead. “When you’re older and have multiple medical problems, it would be very easy to say, ‘What’s the point?’ Carol made the decision that she wasn’t ready to give up. I think that’s very powerful.”