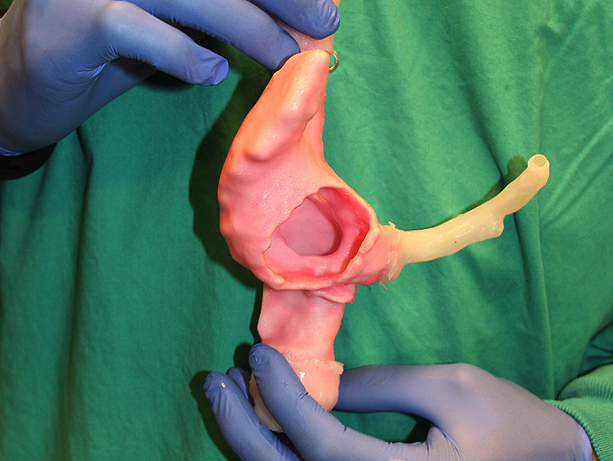 In less than two decades, 3-D printers have raised the public’s eyebrows so often that their manufacturers might've reasonably been accused of grandstanding. Last month, a working automobile of carbon-fiber plastic was printed in 45 hours.

Entrepreneurs and physicians are exploring the technology's potential to enhance and customize the care of patients. Titanium hip joints have been printed, as well as replacement jaws, teeth – even a whole pelvis.

Catheter-based heart procedures have increased dramatically with miniaturized technology’s advance and because it is far less invasive than open surgery. But skill is required to thread a catheter through the femoral artery in the groin up into the multi-chambered organ to reach the area needing attention – a leaky valve, an arrhythmic wall, an obstruction.

"There are two ideas behind the simulator,” said Dr. Kristen Patton, a UW Medicine electrophysiologist. “One is training fellows in this complex skill of moving catheters around the heart. We've also found that, with hearts whose anatomy is really disrupted, we can make a model of the chamber of interest a day or two before the procedure and figure out which catheters will fit and the best approach.

"This has helped with the efficiency of the procedure,” she said. “You don't spend as much time with the patient under anesthesia trying to learn their anatomy."

The back story
Dr. Steve Seslar, a colleague of Patton's, is an electrophysiologist and congenital heart disease specialist at Seattle Children's. In 2010, he crossed paths with Tom Burke, a Seattle materials engineer with a 3-D printer. The trio has collaborated for the past few years to develop the HeartMAP™ Simulator, whose proprietary-secret model material, in its sixth iteration, is palpably similar to heart tissue.

“It’s a great pairing, with back-and-forth between what he can do and what we need,” Seslar said. "He’d bring in a model and Dr. Patton and I would say it’s too stiff or not lubricious enough – the catheter gets stuck. Some models were too weak and would collapse under their own weight or tear. Tom would go back to the drawing board.

“What we ended up with gives tactile feedback that no digital model can match,” Seslar said.

Burke can print a whole heart model, but it’s less costly to print the chamber that the procedure will target. Arrhythmias, which electrophysiologists treat by cauterizing heart-wall tissue, are typically confined to one chamber, Seslar said.

There’s also a plastic case that holds the model chamber in the correct orientation and approximates the distance that the catheter must travel from the groin. All the better for learning.

Patton and Seslar have begun to collect data on the models’ usefulness. They’ve created a protocol in which some fellows receive simulator training and some don’t, and both are measured against outcome criteria, Patton said.

“We have anecdotal examples, and intuitively it follows that practicing on a model before a procedure will lead to a better outcome. We just don’t have that data yet that survival is better or procedures take less time and cost less.”