2005 cancer research is one of journal's most cited papers

2005 cancer research is one of journal's most cited papers 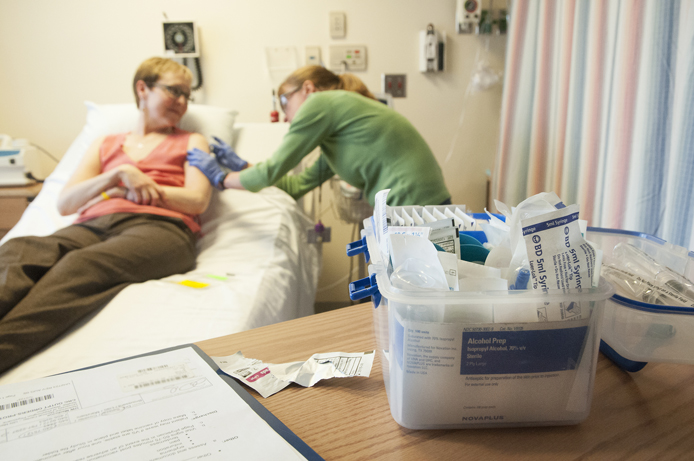 Qingcheng Mao and Jashvant Unadkat, faculty members of the School of Pharmacy, recently learned that a 2005 article they published in the American Association of Pharmaceutical Scientists (AAPS) Journal is one of the 10 most-cited articles in the journal's nine-year history. Their article, “Role of the breast cancer resistance protein (ABCG2) in drug transport,” examined how the transporter ABCG2 relates to a broad range of anticancer drugs and antiviral agents. Transporters are membrane proteins in tissues that help the body absorb, distribute and excrete drugs. Each individual's makeup of transporters is unique.

Mao and Unadkat’s research helped lay a foundation to improve understanding of how breast cancer patients with high levels of the ABCG2 transporter in their system might respond to chemotherapy. It also established the importance of this transporter in drug disposition (getting a drug to its appropriate position in the body and in an appropriate concentration) in human populations including pregnant women.

Qingcheng Mao was lead author of the 2005 paper. He is a UW associate professor in the School of Pharmacy's Department of Pharmaceutics
Qingcheng Mao

Mao, the article's lead author, responded to a few questions about the work:

Q. Why, scientifically, do you think the 2005 study has been so significant?
This article summarized knowledge of the transporter ABCG2 and its relevance to multidrug resistance and drug disposition. It also helped show that the protein is widely expressed in organs such as the liver, kidney, small intestine, placenta and brain.

It also provided potential insights regarding chemotherapy drugs. For example, we emphasized that overexpression of this transporter in an individual is associated with higher levels of resistance to certain chemotherapy drugs. ABCG2 expression has been detected in a large number of hematological malignancies and solid tumors, and the article improved understanding of that fact.

Q. What did this study establish at the time, and how have other scientists used it as a building block?
This was one of the early articles that emphasized the importance of ABCG2 in drug disposition before its role was fully appreciated by the scientific community. There has been an enormous increase in studies of ABCG2 since the paper was published. In fact, the U.S. Food and Drug Administration recently recognized it as one of the most important transporters related to drug disposition and drug-drug interactions. Today, it is considered one of three major transporters causing drug resistance in mammalian cells.

Scientists today are building on our study, as well as others like it, by trying to find ABCG2 inhibitors that can overcome drug resistance in the human body and improve the fate of the drugs conveyed by this transporter.

Q. Did you have a sense of this study’s potential significance at the time of publication?
We thought that the scientific community would see that this transporter plays an important role in drug disposition. We were surprised to learn, though, that our article is one of the top ten AAPS Journal articles cited.

Q. How has this study helped advance your own research?
Based on the hypothesis proposed in our article, we have been conducting research on basic mechanism of ABCG2 as well as the function of this transporter in cells and animal models. We are also looking at how the ABCG2 transporter impacts drugs taken during pregnancy because ABCG2 is a major transporter of toxic substances out of a cell in the placental barrier in pregnant women.

We have attracted National Institutes of Health funding for three ABCG2-related grants that total almost $2.6 million. The grants are “Mechanism of Drug Transport by BCRP/ABCG2,” “BCRP in Pregnancy: Substrate Specificity, Expression and Regulation” and “Hepatic CYP3A Metabolism and Placental Transport of Drugs Used to Treat Drug Abuse.”

Q. Where do you hope this research will lead in the next five to ten years?
We want to further investigate the basic mechanism by which ABCG2 acts to transport drugs and interact with inhibitors. Such studies could help scientists better understand novel therapeutic agents that can be more effective therapies for human diseases including cancers. We also hope this larger body of research into ABCG2 helps improve understanding and prediction of fetal drug safety. This is especially important for the large number of women who need to take medications during pregnancy.