‘Heart in a box’ aims to boost viability of donor organs

‘Heart in a box’ aims to boost viability of donor organs

UW Medicine among 7 programs in U.S. to test circulatory device on transport between donors and recipients
Brian Donohue
09/16/2015 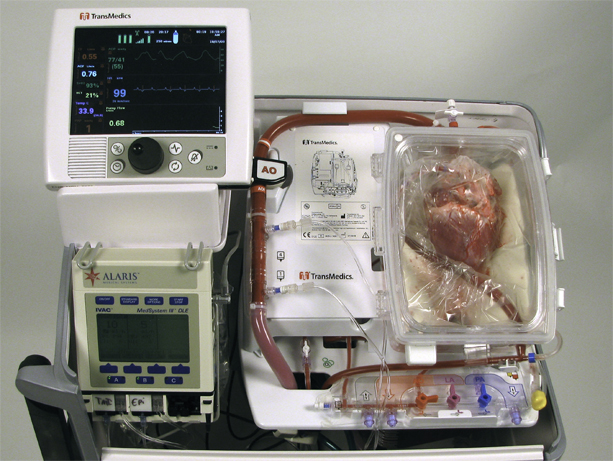 UW Medicine’s Regional Heart Center is one of seven medical programs in the United States testing a device that may improve the availability of donor hearts for transplantation.

The potential game-changer is an ex vivo (out of body) circulatory system that has come to be called “heart in a box.”  Its manufacturer is TransMedics of Andover, Mass.

“The technological advance of this device is that it circulates blood into the aorta and the coronary arteries, and the heart will be beating again all the way to its new home,” said Jason Smith, a cardiothoracic surgeon and transplant specialist at UW Medical Center.

When someone dies and their heart is made available for transplant, a four- to six-hour window exists between harvest and implant. That’s how long the organ can be packed in an icy saline slush in a hand-held cooler – the standard of care for decades – and still be reliably restarted.

That window of viability dictates the distance from which transplant centers accept donor hearts.

“The idea with heart in a box is that because blood is perfusing the heart, you can keep the organ out of the body considerably longer. In Europe, they’ve gone up to 11 hours on the machine and still had a successful transplant,” Smith said.

Beyond extending the range of organ procurement, the device might also increase the number of intended donor hearts that are actually transplanted. This is what the trial will examine.

Hospitals are cautiously selective about the donor hearts they accept in order to give transplant procedures the best chance to succeed. If a prospective donor’s heart has an abnormal echocardiogram or electrocardiogram, it is usually rejected, Smith said.

“We avoid any donor organ we think might have a performance problem. But sometimes, we think the poor echo or EKG is related to the injury that caused the donor to be brain-dead.

TransMedics
The device expands the area from which a hospital can seek a donor heart.
picture of the "heart-in-a-box" device outside a waiting Learjet

It’s an important consideration. In January, UW and other researchers suggested that half of all rejected donor hearts may in fact be transplant-viable. Their study said that chemicals released by the injured brain “stuns” the hearts and makes them function poorly, but that this may be a temporary state from which the hearts recover.

“With the new technology, we think we could go get some of these hearts whose function is marginal, put it on the device for four to six hours and, if the heart function maintains or improves, then that increases our confidence in its viability for transplant,” he said.

In the box, the heart’s function – how well it’s squeezing, how the muscle walls are moving, the metabolic output – all can be monitored.

“This would allow us to look at these hearts out of the donor environment and potentially utilize some of them that we’re not currently using,” Smith said.

The trial of the TransMedics’ portable Organ Care System will evaluate its effectiveness to “recruit, preserve and assess donor hearts that may not meet current standard donor-heart acceptance criteria for transplantation,” the study protocol states.

Other transplant programs involved in the trial are based in Los Angeles, Ann Arbor and Grand Rapids, Mich., Minneapolis, Minn., and Raleigh, NC.  A 2009-2013 U.S. trial found that the device was no less effective than the traditional ice-cooler transport of a donor heart to a recipient.

Between January 1988 and June 2015, UW Medicine surgeons performed 645 heart transplants, more than twice as many as any other Washington state cardiac program in that time frame, according to the U.S. Organ Procurement and Transplantation Network. Thirty-eight heart transplants were performed in 2014 at UW Medical Center, and 45 are projected this year. As of Sept. 15, 2015, 86 people in Washington state were awaiting heart-transplants, according to the United Network for Organ Sharing.