During an event at Fred Hutch, the U.S. Vice President listened to ideas and outlined elements for the White House Cancer Moonshot
Barbara Clements
03/22/2016 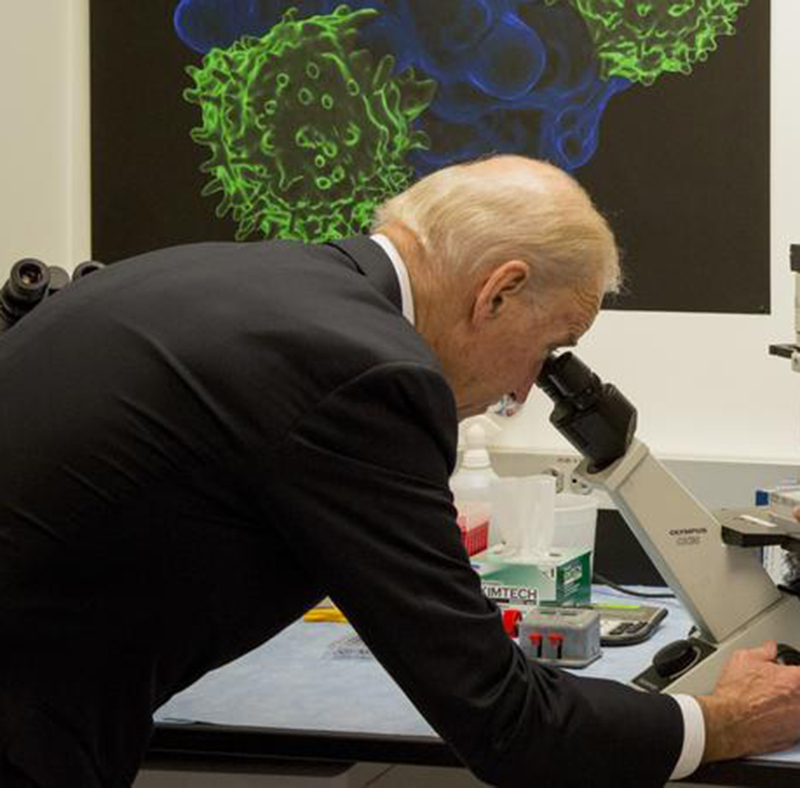 U.S. Vice President Joe Biden brought his cancer “moonshot” listening tour to Seattle on Monday.  He urged the Fred Hutch, UW Medicine,  Seattle Children’s, Seattle Cancer Care Alliance and other local leaders gathered around him to work together to solve the complexities of  curing cancer.  Biden said he sees four key elements that need to be in place for the White House Cancer Moonshot Task Force to be successful. They include:

The task force, as well as its moniker “moonshot” was announced by President Obama during his State of the Union address in January. Because of Biden’s personal experience with cancer in his family, Obama tasked Biden to head the task force. Biden’s son Beau died of brain cancer last year at the age of 46.

“When someone you love is given a death sentence, you try and learn everything you can,” Biden said. “We’re at an inflection point” on this issue, he added.

This was the fifth stop of Biden’s listening tour, which has included the centers of cancer research around the country.  The panel gathered around Biden on Monday included top UW Medicine and Fred Hutch researchers, including Dr. Mary-Claire King, UW professor of genome sciences and of medicine, Division of Medical Genetics,  and Dr. Stanley Riddell, a Fred Hutch investigator in its Clinical Research Division, and a UW professor of medicine, Division of Oncology.

Riddell said that while big data is important, “so is good old fashioned R&D.”

Researchers by their nature tend to be individualistic, said Riddell, who studies immunotherapy, or using the body’s own defenses to fight cancer. Key to fighting cancer is gathering teams across disciplines, he noted.

“We’re on our first date with geneticists,” he quipped. “We need to build real relationships across teams.”

King agreed, saying that adding new people to a team shouldn’t mean having to resubmit a grant proposal. She also emphasized that funding of clinical trials shouldn’t depend on whether the treatments will glean big profits.

“We need to increase NCI (National Cancer Institute) funding to provide clinical therapies that do not appeal to big pharma,” she said.

King was the first to show that breast cancer is inherited in some families; as well as a result of mutations in the gene she named BRCA1. She has also characterized BRCA2 and other genes essential to DNA repair that, when mutant, predispose women to breast or ovarian cancer.


Others on the panel included:

Bard Richmond, philanthropist, a cancer survivor and founder of Community Voice Mail. Richmond underwent a blood stem cell transplant at the SCCA in 2015. He supports neuroscience labs at the University of Washington and cancer research at the Fred Hutch.

Leroy Hood, president of the Institute of Systems Biology. In 1992, Hood created the first cross-disciplinary biology department, Molecular Biotechnology at the University of Washington.

Julie Park, attending physician of Seattle Children’s Hospital and a professor of pediatrics at the University of  Washington School of Medicine