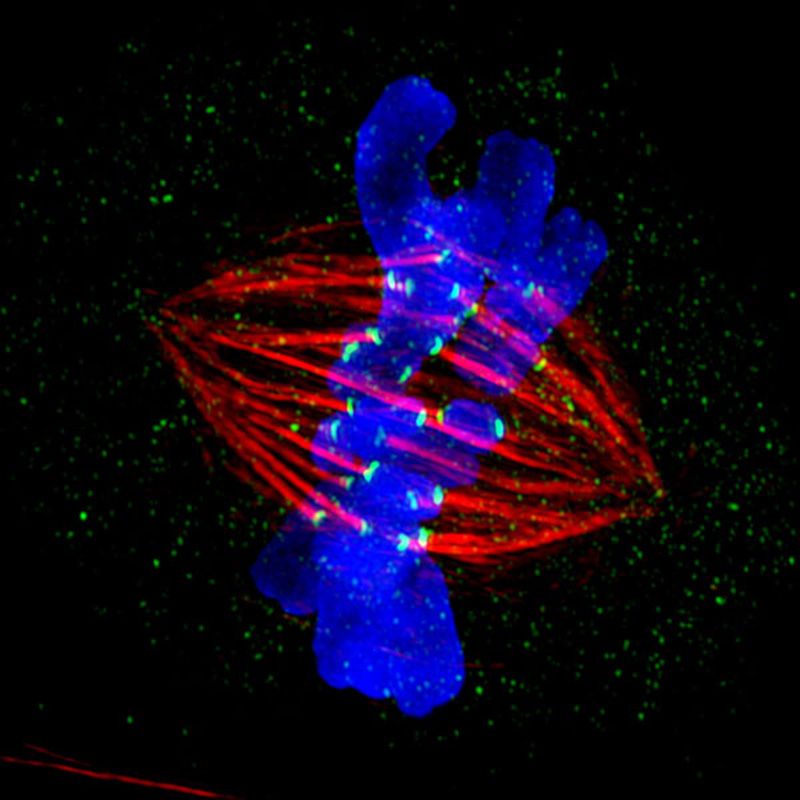 A tension-sensitive “fail safe” protein helps make sure that when our cells divide the two resulting  cells inherit the normal number of chromosomes, researchers from the University of Washington and the Fred Hutchinson Cancer Research Center report today, May 5,  in the journal Cell.

When a cell divides, in a process called mitosis, the dividing cell makes a copy of each of its chromosomes. It then distributes them so that each daughter cell inherits one copy of each chromosome.

If this process fails and one daughter cell ends up with too many chromosomes and the other with too few, the resulting cells will either die, malfunction, or in some cases become cancerous. Indeed, this condition, called aneuploidy, is the most common genetic abnormality seen in tumor cells.

In the  study reported this week, the researchers show how a key protein involved mitosis helps prevent the abnormal distribution of chromosomes during cell division, thereby reducing the risk of aneuploidy.
“The findings provide new insights into the process of cell division and may guide the development of new chemotherapeutic drugs that target the division machinery,” said lead author, Matthew Miller,  a postdoctoral fellow in the laboratory of Susan Biggins, at  the Fred Hutchinson Cancer Research Center's division of basic science, who was senior author of the paper with Charles L. Asbury, University of Washington associate professor of physiology and biophysics..

The molecule, which in humans is called ch-TOG, is a protein that is involved in sensing whether the two sets of chromosomes are correctly positioned, such that they will be drawn to opposites sides of the  cell before it divides. The protein got its name because it is produced by a gene that is overactive in colon and liver cancers, called the Colonic–Hepatic Tumor-Overexpressed Gene (ch-TOG). Versions of ch-TOG appear in many different species, an indication of how essential it is for normal cell function. For convenience, the UW researchers looked at a version of the protein found in yeast, called Stu2.

Stu2 comes into play after the cell prepares to divide by making  copy of each of its chromosomes, which are held together in pairs. Each chromosome contains a protein complex  that forms a structure called the kinetochore, a movement control center. When it comes time to separate the chromosome pairs, thin, thread-like filaments called microtubules extend from opposite sides of the cell and connect with the kinetochores.

Charles Asbury
If chromosomes are separating in the correct direction, tension is strong on the microtubles that are moving them
normal abnormal chromosome separation

, the duplicated chromosomes separate and each is drawn to the opposite side of the cell. The authors discovered that Stu2 is a critical part of this kinetochore structure.

To elucidate Stu2’s function, the researchers isolated kinetochores and attached them to microscopic beads, which they then fixed in place with an intense laser beam, a technique called a laser trap. Once they had the beads fixed in place, the researchers allowed microtubules to attach to kinetochores with and without Stu2. They then drew the microtubules away from the beads gradually increasing the tension until the connection snapped. This technique allowed them to measure tension across the connections in the range of pico Newtons, abbreviated pN. A pN is one trillionth of a Newton. 1 pN is roughly the weight, on Earth, of a single blood cell.

The researchers speculate that Stu2 appears to act like a “fail safe” mechanism to ensure that the duplicated chromosomes are properly positioned to be  correctly pulled apart when the cell divides. When the kinetochore-attached microtubules are from opposite sides of the cell and are pulling in opposite direction they generate tension that causes Stu2 to stabilize the connection. If, however, the kinetochores become attached to two microtubules from the same side of the cell, they  more or less in the same direction and generate less tension, Stu2 acts to destabilize the attachment.  This allows the connection to break and gives the kinetochore another chance to establish a correct connection with the microtubules.

Exactly how Stu2 and ch-TOG do this remains to be figured out. . One theory is that it works along the lines of the children’s toy called the finger trap,  a woven tube which exerts more force when you try to pull your inserted fingers apart, but lets go when you push your fingers together.

“This is the first molecule identified that is involved in sensing tension to ensure cells inherit the right chromosomes,” said Biggins, “so there is a lot of potential to exploit its functions for therapeutic benefit in the future.