​At a memorial symposium for blood geneticist George Stamatoyannopoulos, speakers told how he helped set their course in research. 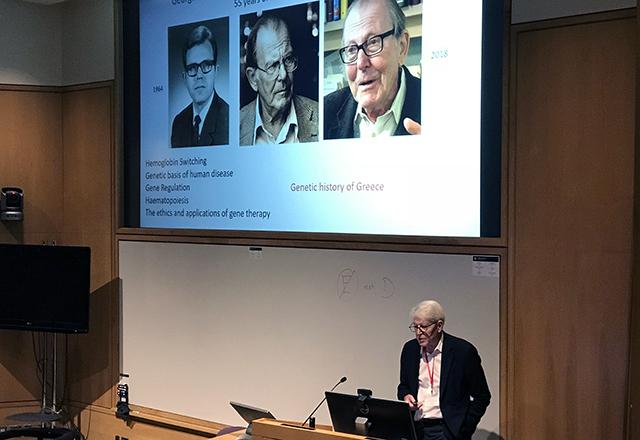 Leila Gray
Medical geneticist George Stamatoyannopoulos was remembered for his personality, his mentorship and his contributions to science over nearly six decades.

In the margin of his thesis at his medical school in Greece in the 1950s, his advisor wrote “young dreamer.” The comment was directed at his hopes for treating inherited blood disorders affecting African, Mediterranean, and East Indian populations.  But, as others later describe him, Dr. George Stamatoyannopoulos was a force of nature not easily deterred.

At a memorial symposium Sept. 16, several scientists and clinicians he had collaborated with, competed with, argued with, encouraged and mentored spoke. They talked about how he shaped the scientific, clinical and geographical exploration of sickle cell disorder, sickle cell trait, and thalassemia. Others showed how his building a world-spanning scientific society had a wider ranging impact on present-day blood research, including immunotherapy for blood cancers, and on cell and gene therapy generally.

He could be bluntly direct, according to their experiences. The gruffness was overshadowed by his abiding interest in people’s lives, his supportiveness and selflessness in helping others succeed, and his inclusivity, without regard to gender, background or differences of opinion.  His wife, a fellow scientist, recalled that her husband “liked nothing better than a spirited dialogue with friends and colleagues.”

Stamatoyannopoulos and his spouse and research partner Dr. Thalia Papayannopoulou joined the UW School of Medicine faculty in 1964, recruited by medical geneticist Arno Motulsky. Like Motulsky, their families had been disrupted by Nazi occupations, and, in their case, by civil war and famine in Greece. They had met as students who had started medical school in their late teens.

Dr. Jan Abkowitz said the couple had to prove their scientific contributions to obtain approval by U.S. immigration officials.  A study published by Papayannopoulou earned their entry and a parole visa. Motulsky was taken aback when his new faculty member informed him that he was “on parole.”

As a faculty member and then as head of medical genetics, Stamatoyannopoulos gave himself fully to his work. As one colleague said, “He left us with the belief that science at its highest was a contact sport that wasn’t worth playing unless you gave it all the passion you could muster.” Abkowitz said that, during his last hospitalization, he was typing a manuscript that traced origins of ancient populations in his country of birth. It was his gift, he said, to the Greek people to understand their genetics.

Among Stamatoyannopoulos’ longstanding research interests was the genetic and regulation of hemoglobin switching – how the oxygen-carrying protein in red blood cells changes from embryonic to  fetal to adult forms. The question obsessed him throughout his life, said Dr. Douglas Higgs, professor of hematology at the University of Oxford in the United Kingdom. Higgs went on to explain this developmental changeover and why studying it was important to sickle cell and thalassemia treatment research. The goal was to free patients from the frequent blood transfusions used to control symptoms.

Higgs said Stamatoyannopoulos was intrigued by why patients with these genetic disorders varied in the severity of their disease.  He studied families with a rare persistence of fetal hemoglobin. From this and other work, inhibiting the deactivation of fetal hemoglobin through chemotherapeutic agents became a proposed solution for sickle cell anemia.

Stamatoyannopoulos saw sickle cell disease as a molecular problem, added Dr. Griffin P. Rodgers, director of the National Institute for Diabetes and Digestive and Kidney Diseases. In addition, he wanted to gain a clearer understanding of red cell formation and maturation overall, and the changes in gene activities and gene regulators that move red blood cell production through these stages. He was convinced this would reveal better ways of treating certain hemoglobin-related diseases. Sickle cell disease eventually became one of the first disorders earmarked up for stem cell research.

Griffin showed an iTrans heat map visualizing the content of Stamatoyannopoulos’ research, as it moved over the years from blood genetics to the human implications of cell and gene therapy.  A message Griffin delivered from NIH Director Francis Collins said he was grateful to Stamatoyannopoulos for his advice and occasional mentorship. He wrote, “George would never rest until he could sort out and get to the bottom of a problem.”

Dr. Punam Malik of Cincinnati Children’s Hospital and the University of Cincinnati, recalled the confidence she received from Stamatoyannopoulos to pursue gene therapies, including gene transfer and stem cell gene editing, for sickle cell anemia. Some of her team’s approaches have advanced to clinical trials.  They would like to develop applications for use in Africa and design effective approaches with the constraints of medical and patient resources in mind.

Before discussing emerging therapies, Dr. Elliott Vichinsky, of the Sickle Cell Center and Comprehensive Thalassemia Center at Children’s Hospital in Oakland, and professor of pediatrics at the University of California San Francisco, flashed back to his residency and research fellowship at UW Medicine and Seattle Children’s.  After Stamatoyannopoulos critiqued his work, he felt at home for the first time since arriving in Seattle.

He had grown up in a large family with five uncles in Brooklyn, New York. His mentor’s commanding yet protective manner was comfortingly familiar.  When Vichinsky drew his own blood for a study, then fainted, his mentor said, “Do something important, but don’t hurt yourself.”

He appreciated that Stamatoyannopoulos stood up for people he believed in and invested himself in the careers of people who wanted to work on behalf of patients.

“It has become an exciting time for sickle cell therapeutics,” Vichinsky said, mentioning work targeting multiple aspects of sickle cell disease pathology or treatment side effects. Among the promising approaches are trying to mimic the fetus/mother immune tolerance and boost postnatal chimerism (co-existence inside an individual of cells with different genetic makeups) to reduce risks from certain therapies. Another is the novel repurposing of agents such as the diabetes drug metformin. Newer drugs are being tried to reduce stroke, renal disease and organ failure in sickle cell disease patients, and infusions of endothelial adhesion molecules are being tested to lessen patients’ sickle cell crises.

Vichinsky also was impressed at Stamatoyannopoulos’ ability to obtain research support early on for a disease that is not U.S.-centric, but that causes severe pain and early mortality among people in countries without sufficient resources for research or clinical care.

Dr. Mitch Weiss, of the Hematology Department of St. Jude’s Children’s Research Department, confirmed that the quest to treat hemoglobin problems was Stamatoyannopoulos’ Holy Grail. Over 57 years, he published 374 papers, and tapped the latest technology to try to solve these issues.

Several speakers emphasized Stamatoyannopoulos’ critical role in advancing new ideas in therapeutic research by leading the creation of the American Society of Gene & Cell Therapy, and recruiting members. At the inaugural meeting, he smiled as he watched the crowd of scientists and clinicians heading up the escalator to the lecture halls, and proclaimed, “I want them to say this is the best meeting they ever attended.”

The symposium concluded with a recap of Stamatoyannopoulos’ studies to chart present day and ancient contributions to Greek population genetics.  Dr. Evangelia Yannaki, medical director of the George Papanicolaou Hospital in Thessaloniki, and Dr. Peristera Paschou of Purdue were among his collaborators. They told the extent he went to gather information, including walking the final distance up a steep mountain that his car could not summit.  His son, Dr. John Stamatoyannopoulos, also a UW Medicine medical geneticist and genome scientist, indicated how his father’s most recent work overturned several myths perpetrated about where ancient Greeks came from and settled.