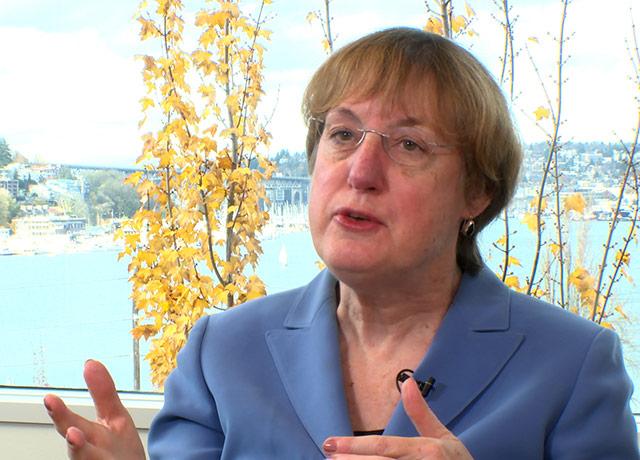 UW Medicine
"I’d say that five years is the bare minimum at this point, and for many women taking currently tamoxifen, we recommend 10 years of therapy," said Dr. Nancy Davidson.

A study published recently in the New England Journal of Medicine generated sobering headlines: Researchers were reporting that among 62,000  women who had been treated successfully for estrogen receptor-positive breast cancer, the most common breast cancer, about 18 percent had it return or spread up to 20 years later. The patients all had been deemed cancer-free after receiving endocrine therapy for five years.

Nancy Davidson, chief of the division of medical oncology at the University of Washington School of Medicine, has long been part of the research group that reported these findings. She sat with me to discuss them. [This Q&A has been condensed.]

Did this finding surprise you?

In the breast-cancer field, we have suspected this was the case for a long time, from clinical research that we’ve already done. But this was the first large-scale international study to really look at 20 years of follow-up.  And it’s sobering because it suggests that even though we have really good endocrine therapy … a number of women are still at risk of recurrence at a much later time.

And that opens up several possibilities for us: One has to do with whether we should extend our endocrine therapy – and in fact that’s going on now. For many women we would suggest that they either continue the tamoxifen or switch to an aromatase inhibitor for a total of 10 years. It also opens a lot of research opportunities, because although we’re focusing on the women who recur, a lot of women don’t.  So how can we separate the women who are destined for a late recurrence from those who are not? We’d love to target additional therapy to the women who would potentially benefit from it, and … spare women who do well from unnecessary therapy.

All study participants had received five years of hormone therapy to suppress tumors, and then stopped taking the medications. Was the portion of women who had a late recurrence, almost 18 percent, surprising in itself?

In retrospect, probably not. What came out to me from this paper was the long follow-up and the notion that standard things we measure – lymph node involvement, tumor size – that those factors continue to have an impact on how women do over time. That’s helpful to us as we think about trying to parse out who’s at greater risk. Again, I would focus on the reverse [finding of the study], which is that many women don’t have a recurrence of breast cancer and go on to live a full life.

Do the study findings challenge conventional thinking or treatment standards in any way? If you’ve suspected that hormone-therapy regimens should be extended, have you prescribed tamoxifen for longer spans for your patients?

To summarize decades of research and tens of thousands of women: Initially we prescribed tamoxifen for only a year. Then we did studies where 2 years was better [for patient outcomes] than one. Then we did studies that suggested that five years was better than two. And then there were some studies that looked at 10 years versus five, and the early findings were not very favorable. So that led to the decision to limit these therapies to five years. But then, with time, other, larger trials were able to document that there were longer-term benefits to 10 years of therapy.

So I’d say that five years is the bare minimum at this point, and for many women taking currently tamoxifen, we recommend 10 years of therapy.  That’s been pretty well embraced for patients who are interested in it.

Right now our struggles, over the last year particularly, have been with women who take the aromatase inhibitors, the alternative therapy for postmenopausal women. We’re struggling with whether women should take those beyond five years. Studies that came out recently were not as robust as we would have hoped in terms of showing benefit beyond that span.

Can you talk about what tamoxifen does to a woman’s body?

Tamoxifen is a mixed estrogen agonist-antagonist. In some tissues in a woman’s body, it acts as an anti-estrogen but in other tissues it acts as an estrogen. So its side effects are good and bad. The anti-estrogen properties will give some women more hot flashes and more postmenopausal symptoms. But its estrogen-promoting activity actually inhibits osteoporosis. The other two main side effects, which are rare but troubling, are slight increased risks for blood clots and uterine cancer.

We take the side effects into account when we counsel women about being on the drug. For most women who have an invasive breast cancer, with positive estrogen-receptor tests, they do better on tamoxifen than off of it. So we’ll push them to try to finish out at least five years of treatment with that or the related drugs.

Are women thrilled to get off of tamoxifen?

Many, many patients take the attitude of “When I get to five years, I’m done, I’m outta here.” They’re thrilled about the possibility of coming off treatment. Others are quite concerned, and if they are tolerating the therapy well – the disease has not come back – those patients will say “I’m not broken [so] don’t fix me. Don’t change a thing.” Those patients have sometimes been disappointed at the suggestion that there’s no information to indicate that longer treatment is better.

Does this finding change you talk with breast cancer patients about the prospects of being cured of cancer? What language do you use?

I don’t think this changes how I talk about it, but you raise an interesting question. When patients come in, of course what they want to know is the likelihood that they would be cured. That leads to what is the definition of a “cure.” I say to patients that my goal is that you would receive treatment and then go on to live a normal life expectancy without a recurrence of breast cancer.

I think this finding gives us very good evidence that we can use to counsel patients in making the decision about their individual preferences toward therapy, which we try to personalize based on features of that patient’s tumor. And we can use the finding to help frame the question of optimal duration of therapy: Should we stop at five years or continue?

Do the findings indicate that breast cancer is more insidious than some people might have thought?

Yes, it is sobering for all of us to realize that this type of breast cancer is perhaps more insidious than we might’ve hoped, but that tells us what the challenges are and what we need to address.

Biologically that’s different than, for example, the tumors that lack the progesterone and estrogen receptors and the HER2 gene. Those “triple-negative” breast cancers have a very steep recurrence rate in the first few years, but if you get beyond that, they’re not so likely to come back.

If you’re 77, say, and not in very good health, then you’re not too worried about a late recurrence of breast cancer. But for somebody who is 65 and in very good health, and with a prospectively longer life expectancy, these new data pertain more to her decision-making.

You were involved with this research?

Yes. Since the mid-1990s, I’ve been part of an amazing team called the Early Breast Cancer Trialists Collaborative Group. It came together in 1985-86 and the goal at the time was to amalgamate all of the data from randomized clinical trials of early stage breast cancer from around the world. To take all those published and unpublished data to Oxford [England] and use well-established statistical methods to probe for important treatment decisions.

Our steering committee previewed these data in June as they were being accepted by the New England Journal of Medicine. I think it’s an amazing example of team science. Breast cancer trialists from around the world have brought together all these data. We have real-time follow-up over 20 years that looks at questions like: What type of chemotherapies are appropriate, and in what setting, for early breast cancer? If someone has an in-situ breast cancer, what should she do? What’s the best way to administer radiation?

None of this would be possible if we hadn’t had all the patients and doctors who are willing to participate in all the clinical trials. I think it’s a testimony to the enormous partnership between patients, doctors, and statisticians from around the world.

What would you say is the next step for this group? Discerning which people are in this group of 18 percent whose cancers are predisposed to recur late?

We’d like to, but that may not be possible in this collaboration. Some of the next steps for this question will require tissue interrogation, and we didn’t do that; we only have the data.

We’re working on one of my long-time personal interests: the treatment of very young women with breast cancer – specifically whether we should suppress ovarian function, because in young women, the ovaries are the primary source of estrogen. We’re about undertake an analysis like this to look at the ovarian-function suppression trials from around the world.