Acquisition of specific genetic changes in virus’ cell binding mechanism may have led to massive expansion of these variants. 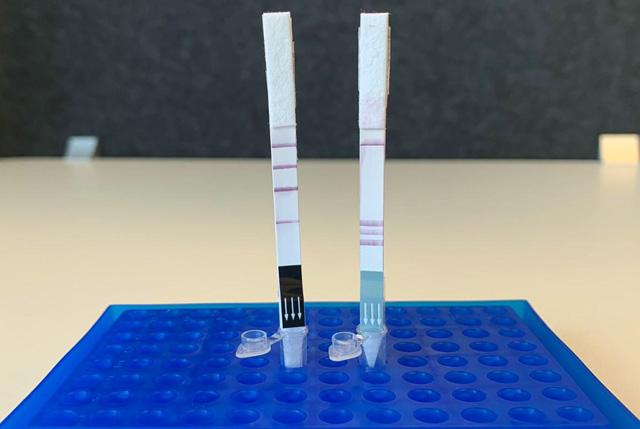 A subset of patient coronavirus test samples, collected since November in six U.S. states, showed an increasing number of amino acid mutations in a region that helps the virus bind to host cells.

Among the rising mutations discovered in those late-fall, early winter samples, the L452R was dominant.   This mutation, riding along with four other mutations, occurs in a recently discovered California coronavirus variant, designated CAL.20C (also goes by names B.1.427 and B.1.429), that is undergoing massive expansion across the state and is associated with many outbreaks.

In some of the samples, the researchers found another L452R-carrying virus variant that emerged more recently. It is now also circulating in California and has started to show up in across states. This variant caused the only recorded case of COVID-19 in apes by infecting a gorilla troop at the San Diego Zoo in early January.

In that newer variant, designated CAL.20A (B.1.232), the L452R mutation is the only one in the Spike protein that latches the virus onto cells to create a pathway to inject its genetic materials. The Spike proteins are what give the coronavirus its studded, crown-like appearance.

Additional analyses have shown that several coronavirus lineages carrying L452R mutations have arisen around the world, thereby creating a global exponential increase in these types of coronavirus variants.  Almost all of them were reported between December 2020 and February 2021.

The researchers determined that the L452R mutation alone triggered the emergence of the two California and multiple global variants.

A rise in mutational variants, particularly in this part of the virus, is of public health concern, because of the potential that they might make the pandemic coronavirus more infective, more virulent or more able to escape protective antibodies, the scientists conducting the study noted.

The findings seem to suggest that the L452R, in and of itself, offers significant adaptive value to the pandemic corona virus. From a virus evolution standpoint, positive selection for this mutation somehow became strong only in the past few months.  It is not certain why this happened, but it could have occurred as the virus adapts to growing population immunity or the containment measures.

How might the mutation provide a competitive advantage for the strains of virus that carry it? The mutation exchanges arginine to replace the amino acid leucine-452, which is in direct contact with the ACE2 cell receptor for the coronavirus. This replacement is predicted to create a much stronger attachment of the virus to the human cells and also might allow it to avoid the neutralizing antibodies that try to interfere with this attachment.

However, although evidence for such assumptions is growing, additional research is necessary to determine the exact impact of the mutation on the virus structure and function. Additional work is also needed to see how it might affect the transmissibility and infectivity of the virus, how the immune system responds to the variant, and the course and severity of disease.

Because of the possibility of a powered-up version of the virus, the authors of the study say that the L452R variants warrant close surveillance and more in-depth functional studies of how the mutation operates and how the different variants interplay.

The early findings from the study are published as a pre-print on BioRxiv.  The senior author is Dr. Evgeni Sokurenko, professor of microbiology at the University of Washington School of Medicine.  An M.D./Ph.D. medical scientist, he explores how new strains of human pathogens emerge and spread, and how they acquire treatment resistance.  The lead author is Veronika Tchesnokova, also of the UW medical school’s Department of Microbiology and ID Genomics, Inc.

A total of 570 positive test samples from April 2020 through February 2021 were included in this particular study.  They were gathered in Washington, California, Arizona, Colorado, Minnesota and Illinois.

Other agencies participating in this study were IEH Laboratories and Consulting Group, ID Genomics, The Antibiotic Resistance Monitoring, Analysis, and Diagnostic Alliance (ARMADA), and Kaiser Permanente Washington and its Research Institute.

The study was supported by the ARMADA Foundation, UW Department of Microbiology funds, and corporate funding by ID Genomics and IEH.