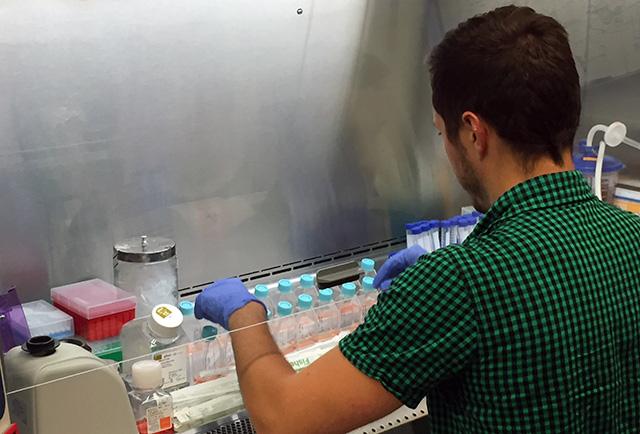 While some types of RNA viruses cloak themselves to hide inside a cell and create copies of themselves, a certain sensor might be attuned to their whereabouts. A slight variation in their genomic code gives some people’s cells the capacity to produce this sensor.

Many positive-strand RNA viruses share a strategy to avoid detection by a cell’s immune system until they can increase their numbers. Among them are the SARS-CoV-2 virus,  flaviviruses such as West Nile and Zika, as well as the picornaviruses behind polio and some heart and brain inflammation.

After invading a cell, these types of viruses take over part of an intracellular membrane, within the system of membranes that form compartments within the cell.  The viruses use this modified organelle as a refuge for replicating themselves. Their viral products are thereby shielded from most of the cell’s innate immune sensors.

A new study looks at how a variant of the enzyme, oligoadenylate synthetase 1, targets the hiding spots of these viruses.  This isoform of the enzyme is called OAS1 p46. The OAS family of sensors are prompted by interferon to seek out RNA viruses or their locations. This reconnaissance helps the cell defend against the attack.

Although much research has documented the importance of OAS proteins in activating an enzyme that cleaves viral RNA in order to block a variety of different viruses from replicating, little is known about how individual OAS proteins contribute to this breadth of antiviral activity.

Most of a cell’s RNA virus sensors are deployed to detect viruses within the cytosol that is between the nucleus and the outer membrane of the cell.  They sense viral RNA that accumulates in the cytosol during infection.

In contrast, the OAS1 p46 protein isoform homes in on the endomembrane system, particularly the endoplasmic reticulum and the Golgi apparatus. The Golgi is a cellular mailing room where proteins are packaged and dispatched.

The OAS1 p46 isoform is also prenylated, a biochemical tune up that, in this case, gives this protein the ability to traffic to the membranes.  This isoform also has additional help from amino acids at the tail end of the protein that also improves its antiviral activity.

“Targeting innate RNA sensors to the endomembrane system may enhance their ability to sense RNA generated by viruses that use these compartments for replication,” the researchers noted in their paper, which appears in eLife.

The senior author of the paper is Ram Savan, an associate professor of immunology at the University of Washington School of Medicine in Seattle. His lab explores how variations in, and regulation of, innate immunity genes help determine resistance or susceptibility to serious viral infections that affects us.

The lead authors on the international, multi-institutional study are Frank W. Soveg, a recent graduate student in the Ram Savan Lab and Johannes Schwerk, acting instructor in immunology at the UW School of Medicine. All three are also members of the UW Center for Innate Immunity and Immune Disease.

The authors found that the OAS1 p46 isoform’s localization to these membranes enhances the cell’s virus sensors access the viral replication sites. This in turn results in a stronger antiviral activity against the sorts of RNA viruses that tend to use this hiding-in-a-membrane tactic to covertly multiply.

The scientists went on to analyze the human genetics behind the OAS1 p46 isoform, and the benefits of having this genetic variant, by examining lab samples from patients affected by COVID-19.

“In this study,” Ram Savan noted, “we identify a causal single nucleotide variant in the oligoadenylate synthetase 1 gene that predicts COVID-19 severity.”

Savan explained that the genetic data show a strong association of the A allele that produces the OAS1 p42 protein isoform with severe COVID-19 disease requiring mechanical ventilation of patients. On the other hand, the G allele producing OAS1p46 protein protects from severe COVID-19. The results from patients in the Pacific Northwest were reproduced in a larger European cohort.

In summary, the scientists noted that their findings show that targeting endomembranes is vital for the antiviral action of OAS1 against specific types of immunity-evading pathogens.  The work demonstrates how critical such intracellular membrane targeting is in detecting dangerous viruses that replicate on these membranes.  The results also suggest that the control of SARS-CoV-2 replication early on in infection, through the actions of the OAS1-p46 isoform, is an important factor in reducing the severity of COVID-19 disease.