It doesn’t take much for soldiers to feel cared for

It doesn’t take much for soldiers to feel cared for

Researchers found that the caring texts, among recipients, reduced the chances of a suicide attempt. 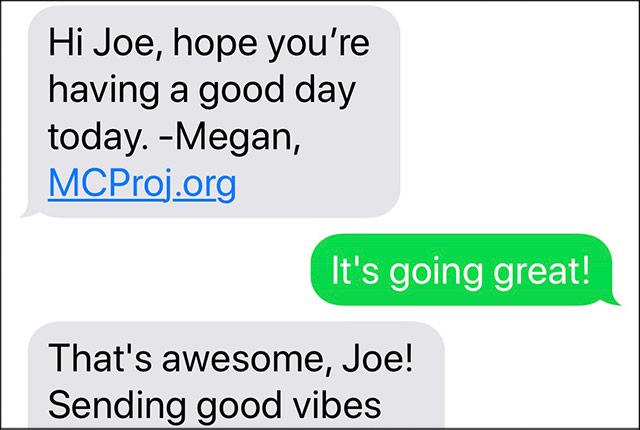 A soldier named Jerome Motto received caring letters from home in World War II. They helped boost his spirits and later led to one of the nation’s first successful suicide interventions.

Today, with military personnel being more mobile, researchers tested out the effectiveness of caring texts sent to active-duty military.

The study of 658 randomized participants at three military installations was led by Kate Comtois, UW professor of psychiatry and behavioral sciences. The results were published Feb. 13 in JAMA Psychiatry along with a podcast with the researchers.

Comtois said the most significant finding was that the caring contacts reduced the odds of a suicide attempt. The contacts lowered the risk from 15 percent to 9 percent.

“Caring contacts is an entirely different way to engage and take care of suicidal individuals,” she said. “It can both prevent suicidal behavior and provide support over periods of stress and transition.”

As for the primary aims -- reducing current suicidal ideation and suicide risk incidents, such as hospitalizations or medical evacuation -- the study was inconclusive. But the study did have impactful findings and secondary outcomes as well as clinical implications.

The study recruited Army and Marine Corps personnel identified as being at risk of suicide at three bases in the United States. The control group was given 11 text messages from a clinician, who engaged with the service members, including calling them on the phone if they were feeling urgent distress.

This simple intervention builds on the work of Jerome Motto, a World War II soldier who became a psychiatrist and researcher. He used caring letters to conduct the first successful clinical trial to reduce suicide deaths.

Military personnel historically have had a lower rate of suicide than the general population, Today, however, veterans have a 50 percent higher incidence of suicide than the general population, according to the Department of Veteran Affairs Suicide Data Report, 2006-2016. In 2018, the U.S. military experienced the highest number of suicides among active-duty personnel in at least six years. A total of 321 active-duty members took their lives during the year (57 Marines, 68 sailors, 58 airmen, and 138 soldiers), according to Military.com.

In this study, just under 14 percent of text responses mentioned difficulty and adversity, but after a few exchanges with a clinician, the service member felt better, said Amanda Kerbrat, a research scientist with the UW Department of Psychiatry and Behavioral Sciences.

“Most people didn’t seem to need much to get the message that someone cared and was looking out for them,” she said.

During the study, which took place from April 2013 to September 2016, five service members indicated they were suicidal and were called by a clinician immediately, said Kerbrat.

Two accompanying editorials in JAMA Psychiatry addressed the research by Comtois and colleagues.

“Comtois et al have confirmed that is possible to conduct high-value suicide prevention research in the active-duty military,” wrote three researchers at University of California, San Diego, Harvard Medical School and the Uniformed Services University of the Health Sciences in Bethesda, Maryland.

Charles Hoge, with the Center for Psychiatry and Neurosciences at the Walter Reed Army Institute of Research in Silver Spring, Maryland, called the study a “hallmark clinical trial from the DoD [Department of Defense] portfolio.”  Hoge, however, said the study joins other intervention trials in delivering primarily null or inconclusive findings in military and veteran populations.  He noted that only 30 percent of veterans are engaged in Veterans Affairs care, and he laid out what needs to be understood and implemented to prevent more suicides.

For the researchers, caring texts is something that can be implemented with some guidelines.

“The intervention is ready for prime time,” said Comtois, noting that healthcare systems still need to sort out issues such how as who will be delivering the messages and guidelines for what they will include. She and colleagues are working on a free toolkit for healthcare providers.