This achievement is part of a broader effort to assemble a more complete reference sequence of the human genome. 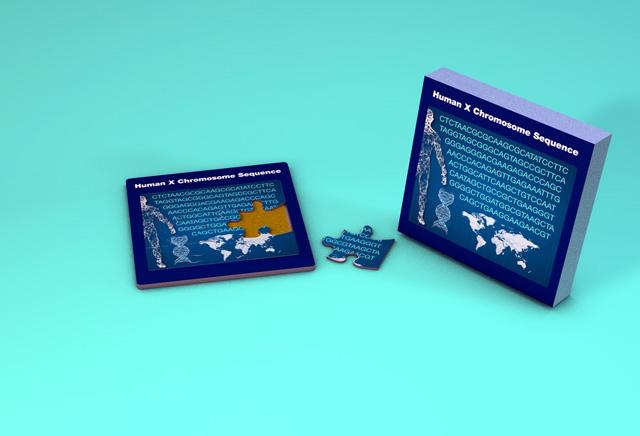 Ernesto Del Aguila III
Ultra long reads of DNA gave the researchers bigger pieces to work with and made it easier to solve the puzzle of the X chromosome assembly.

Conducted on a human X chromosome, the project showed that obtaining a precise, base-by-base sequence of a human chromosome is within reach. This study is part of a larger plan to assemble all other human chromosomes with as few gaps as possible.

In this Telomere-to-Telomere Consortium, researchers are working to assemble a more complete reference of the entire human genome, chromosome by chromosome.

The consortium gets its name from the protective caps marking opposite ends of each chromosome. The funding source and organizing center is the National Human Genome Research Institute at the National Institutes of Health.

The researchers began with the X chromosome, partly because a more complete assembly might uncover new information about many medical conditions that are sex-linked.

“The first complete telomere-to-telomere assembly of a human chromosome demonstrates that it may now be possible to finish the entire human genome using available technologies,” the scientists wrote in their paper. Although they concentrated on finishing the X chromosome, they also began reconstructing other human chromosomes. These have a few gaps remaining, but the foundation is established for completing the assembly of those chromosomes.

While some of the remaining human chromosomes should be relatively easy to assemble, the researchers noted that several others will be difficult. The hardest area of the X chromosome to explore was its centromere. This is the highly condensed connector region for chromosome replication.

The methods and findings for the X chromosome sequencing were reported in a fast-tracked, early version of a manuscript published July 14 in the scientific journal Nature.

More than 30 scientists from several institutions in the United States and abroad collaborated on this effort. Heading the research were lead and corresponding author Karen H. Miga from the University of California Santa Cruz, co-lead author Sergey Koren and senior author Adam Phillippy, both from the National Human Genome Research Institute.

Among the scientists contributing their expertise to this work were several at the University of Washington School of Medicine in Seattle. They included Evan Eichler, professor of genome sciences and a Howard Hughes Medical Institute investigator, Mitchell R. Vollger, David Porubsky, Glennis A. Logsdon,  and Amy B. Wilfert, all from the Department of Genome Sciences, and Jeanne Fredrickson and Rosa ana Risques, both from the Department of Pathology.

“This is an important first step and a realization of the long-term goals of the Human Genome Project,” said Eichler. “Complete assembly of other chromosomes and then complete diploid genomes are the next challenges.”

While some of the human chromosomes should be relatively easy to assemble, the researchers noted that several others will be difficult. The hardest area of the X chromosome to explore was its centromere. This is the highly condensed connector region for chromosome replication.

The X chromosome in this study came from a hydatidiform mole, an overgrowth of tissue from a placenta. This tissue is special because it carries only copies of the father's 23 human chromosomes, rather than a set from both the mother and father. This makes it less complicated to analyze the content of its chromosomes. The hydatidiform mole DNA sample was originally selected by the Eichler lab more than 10 years ago to resolve complex human genetic regions that remained unfinished as part of the Human Genome Project.

The latest study benefited from advances in high-coverage, ultra-long reads of DNA. Instead of trying to figure out how to put together many short reads, the scientists managed fewer, larger puzzle pieces. Ultra-long Oxford Nanopore sequencing made it quicker, more accurate, and less costly to analyze the DNA. This technology identifies the order of the four DNA coding chemicals through fluctuations in an electrical current as they pass through a very tiny hole. Other new technologies helped in validating the results.