​Even with mild cases, COVID-19 impact can persist

​Even with mild cases, COVID-19 impact can persist

Long-term debility could have enormous health and economic consequences worldwide due to numbers infected. 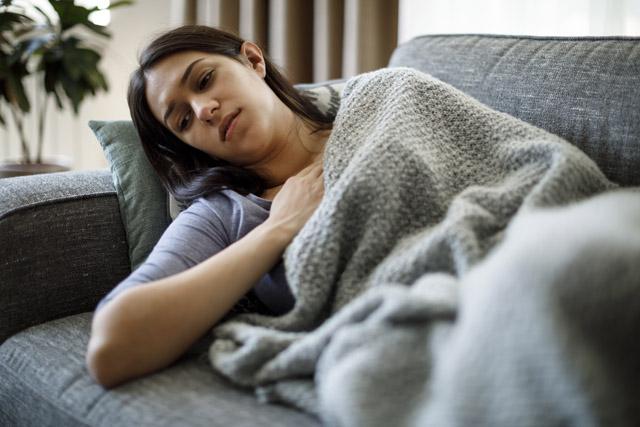 Even mild cases of COVID-19 have the potential of leaving behind persistent, debilitating symptoms in some patients.  Fatigue, a loss of smell and taste, and other problems can continue to lessen quality of life and the ability to carry out routine daily tasks for several months after the acute infection.

That is a key takeaway from one of the longest duration studies of people who have had COVID-19.  The participants were studied for six to nine months after their initial bout with the pandemic coronavirus

The findings are published in the Feb. 19 issue of JAMA Networks.

What makes this study unusual is that many of the participants did not become severely ill during their acute phase of COVID-19, and were not hospitalized.

“Lingering symptoms are common in those who were sick enough to be in the hospital, as well as in those who really weren’t sick at all when they were diagnosed.  They didn’t even need to be seen in a clinic or an emergency department,” said senior author Dr. Helen Chu, associate professor of medicine, Division of Allergy and Infectious Diseases, at the University of Washington School of Medicine.

The participants in this study were from the greater Seattle area. Chu said that additional data will become available from other parts of the United States, as other researchers across multiple geographic areas are also checking on the aftermath of COVID-19 infections in a diversity of populations.

Chu said that these comparisons across the country and the world would help medical scientists tease out the risk factors for developing long COVID.

“The question is, what is driving this?” Chu asks.  “Is it some sort of immune activation, some sort of inflammation or the development of autoimmunity?”  She mentioned that her and other labs will be analyzing blood samples from patients with long COVID to try to figure this out.

She explained that there has always been a phenomenon of post-viral malaise some people do develop after influenza and other infections.  For example, they may still feel tired and lacking in energy for a while after they have gotten over the worst of their sickness.

“This is what this post COVID syndrome is looking like, but up until now we have not had the numbers or proportions of people who have lingering symptoms,” she said.  “There hasn’t been sufficient research to understand what causes it or ways to treat it.  In the meantime, the first thing we are doing is to quantify and describe it.”

The results of the study are cautionary for young, healthy people who think catching the pandemic coronavirus wouldn’t be that bad for them.

“What’s clear is that you can do well initially, but then overtime develop symptoms that are quite crippling in terms of fatigue,” Chu said.

Until there is a vaccination phase for younger adults, the key, the researcher said, is to keep taking precautions against COVID-19.  It’s not just the short-term symptoms that should be of concern, but also the potential for long-term consequences.

The individuals in this project were enrolled as part of HAARVI, Hospitalized or Ambulatory Adults with Respiratory Viral Infections.  HAARVI started in 2016 to look at acute influenza and similar illnesses.

“But when Seattle became the initial epicenter for the pandemic in the United States, we then quickly pivoted to look at COVID-19,  ” said Jenni Logue, a research scientist in the Chu lab.  The researchers enrolled about 300 individuals into this longitudinal study to examine clinical outcomes, immune responses and long-term effects.

They saw that 30% of their participants reported worse health and quality of life, compared to how they felt before their infection.   Additionally, 8% said they weren’t able to carry out daily chores.  This included not being able to lift heavy objects, or stand or walk unassisted for more than a short period of time.

“We’re going to have to start looking into what kind of help can be provided to overcome this fatigue and help people get back to their normal lives,” Logue said.

“There are a lot of hardships already now,” said project researcher Nicholas Franko.  On top of that are the burdens of illness, then persistent symptoms.

“This study is a start to assessing more widely what this is like for people,” Franco said.  He added that they are going to need support to help overcome their symptoms, which, remarkably, can persist for six months or more after the acute illness.

With the numbers of pandemic cases globally, if only a small percentage of them end up with lingering symptoms, that is still an enormous group of people whose lives have been changed.  In their paper, the researchers point out that long COVID is likely to have both healthcare and economic consequences worldwide that will need to be addressed.

The study published in this week’s JAMA Network was funded by grants from the Bill and Melinda Gates Foundation.